Banksy, arguably the most notorious street artist working today, joins his popular graphic style with his famous stencil graffiti technique to communicate his witty artistic remarks. Based in the UK, Banksy has become known for his activist work, often providing social commentary with a dark twist and performing provocative stunts that continue to garner international attention.  His genuine concern for social matters carries across his career, perennially manifesting in new forms. Banksy continues to grow his fanbase, bringing people closer to the issues he addresses with sharp criticism through his cool and sometimes comical style.

Banksy, arguably the most notorious street artist working today, joins his popular graphic style with his famous stencil graffiti technique to communicate his witty artistic remarks. Based in the UK, Banksy has become known for his activist work, often providing social commentary with a dark twist and performing provocative stunts that continue to garner international attention.

Myths and much speculation about Banksy’s identity continue to circulate, yet he has chosen anonymity due to the partly illegal nature of his work. Believed to have been born around 1974, Banksy spent his youth in Bristol’s underground scene where he first executed his early free style graffiti.

Once hiding under a dustcart after being caught by the police, Banksy was inspired to adapt the more efficient stencil method. One of his first stencil pieces is the mural ‘The Mild Mild West’ (1999), a teddy bear throwing a Molotov cocktail at three approaching riot police. Banksy produced the piece in response to increasing police attention to unlicensed rave parties in the city.

‘Coppers’, police embraced in a deep kiss or snorting cocaine from the pavement, have become recurring characters in Banksy’s visual repertoire alongside his signature mischievous rats and kids caught in rebellious or moving acts. Drawing from popular imagery, Banksy also creates mocking mashups, swapping the guns of ‘Pulp Fiction’ stars Samuel L. Jackson and John Travolta for bananas, equipping a sassy Mona Lisa with a bazooka and celebrating Queen Elizabeth II with a Ziggy Stardust lightning bolt over her face.

Banksy’s art is rooted in his activism, often taking an anti-capitalist, anti-war and anti-establishment stance. This is especially emphasised in his site-specific projects in politically charged areas. In 2005 he unveiled blue skies and picturesque scenes painted through Trompe-l’œil holes on the Palestinian side of the Israeli West Bank barrier. ‘How illegal is it to vandalise a wall, if the wall itself has been deemed unlawful by the International Court of Justice?’, he commented on this project.

Banksy continues to explore his satire in other mediums. He directed the street art documentary ‘Exit Through the Gift Shop’ which premiered at the 2010 Sundance Film Festival and was nominated for the Academy Award for Best Documentary Feature. In 2015, Banksy staged the pop-up exhibition ‘Dismaland’, a sinister amusement park parody which he realised at a disused lido at a seaside resort in Somerset, England.

Pieces like ‘I can’t believe you morons actually buy this shit’ (2007) convey Banksy’s critical attitude toward the high-end art market, though his works are none the less coveted as his murals continue to be torn out of walls and sold. In 2018 he made headlines when his painting ‘Girl With a Balloon’ (2006) self-destructed during a sale at Sotheby’s through a shredder hidden in the frame. The work was subsequently renamed ‘Love is in the Bin’ and deemed the first performance piece staged and sold during auction.

In May 2020, amidst the COVID-19 crisis, Banksy donated a drawing to the Southampton Hospital in England to pay tribute to frontline health workers and raise funds for the National Health Service. His genuine concern for social matters carries across his career, perennially manifesting in new forms. Banksy continues to grow his fanbase, bringing people closer to the issues he addresses with sharp criticism through his cool and sometimes comical style.

LOVE IS IN THE AIR 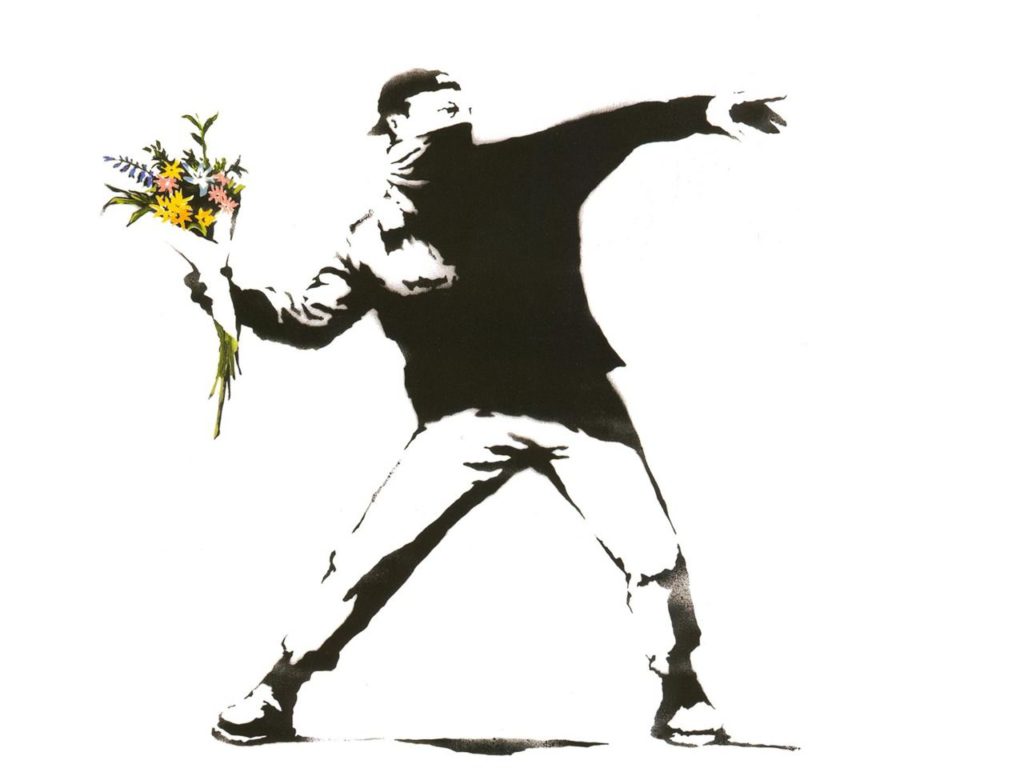 One of Banksy’s most famous images is ‘Love is in the Air’, also known as ‘Flower Thrower’ or ‘Flower Bomber’. The design, first made in 2003 on the wall of the West Bank in Jerusalem, was initially conceived as a site-specific mural. It is now sold in printed editions and, from 2016, as a three-dimensional sculpture.

‘Love is in the Air’ depicts a young man dressed in militant-like clothes and a baseball cap, his face covered with a bandana. In his characteristically ambiguous style, Banksy plays with unexpected juxtapositions and cognitive dissonance. Instead of throwing a grenade or a Molotov cocktail, the young protester is shown throwing a bunch of flowers. What is initially understood as a symbol of violence and aggression is turned into a universal representation of peace and love.

Banksy, in line with his anti-war and anti-establishment philosophy, chose the 760km long wall as his canvas, turning it into a space on which he could project his feelings of hope and solidarity with Palestine. Never shying away from political controversy, Banksy himself asserted that the wall ‘essentially turns Palestine into the world’s largest open prison’.

This artwork, juxtaposed by a bright red background in some editions, is nevertheless immediately recognisable as one of the artist’s most famous and poignant stencils. In 2005, Banksy returned to Israel and produced nine more works on the subject of the Palestinian conflict in support of equality and freedom. Ten years later he returned once more, to paint four new artworks that highlight the struggles of people living in Gaza, placing his provocative stencils across the ruins of a city ripped apart by war. 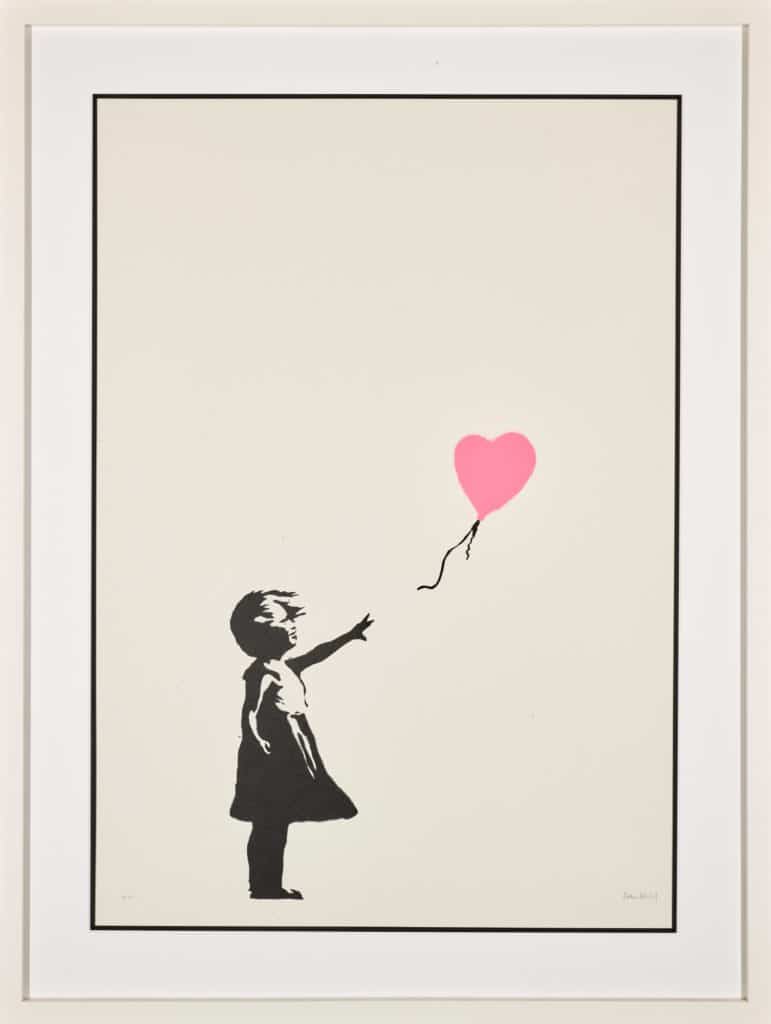 Banksy’s ‘Girl with Balloon’, also known as ‘Balloon Girl’ or ‘Girl and Balloon’, first appeared on the streets of London in 2002. Depicting a young girl reaching for a red heart-shaped balloon floating away in the wind, the mural was made on Waterloo Bridge but was soon painted over by the council. Recently, due to its lyrical qualities depicting the hopes and desires of innocent children worldwide, the image was voted the most loved in the UK.

Since then the design has resurfaced not only in prints but also in graffiti art, constantly reworked by the artist to apply to various national and international struggles such as the Syrian war, the Palestinian conflict and the 2017 UK election. As is typical of Banksy’s art, the image can be read in different ways. The child may either be reaching for the heart balloon, a metaphor for freedom and peace, or releasing it, signifying a loss of hope for the new generations.

‘Girl with Balloon’ has featured in auctions in the last decade, both as original murals peeled off their original walls and as edited print series. Infamously, in 2018, a framed edition of ‘Girl with Balloon’ self-destructed through a shredder implanted in its frame during an auction. The mechanism was put into action right after the sale of the artwork for more than £1 million. While some critics read this as a prank, others have claimed it represents a performative, iconoclastic statement about the nature of Banksy’s art, which, like street art in general, is meant to be collectively experienced rather than privately owned. 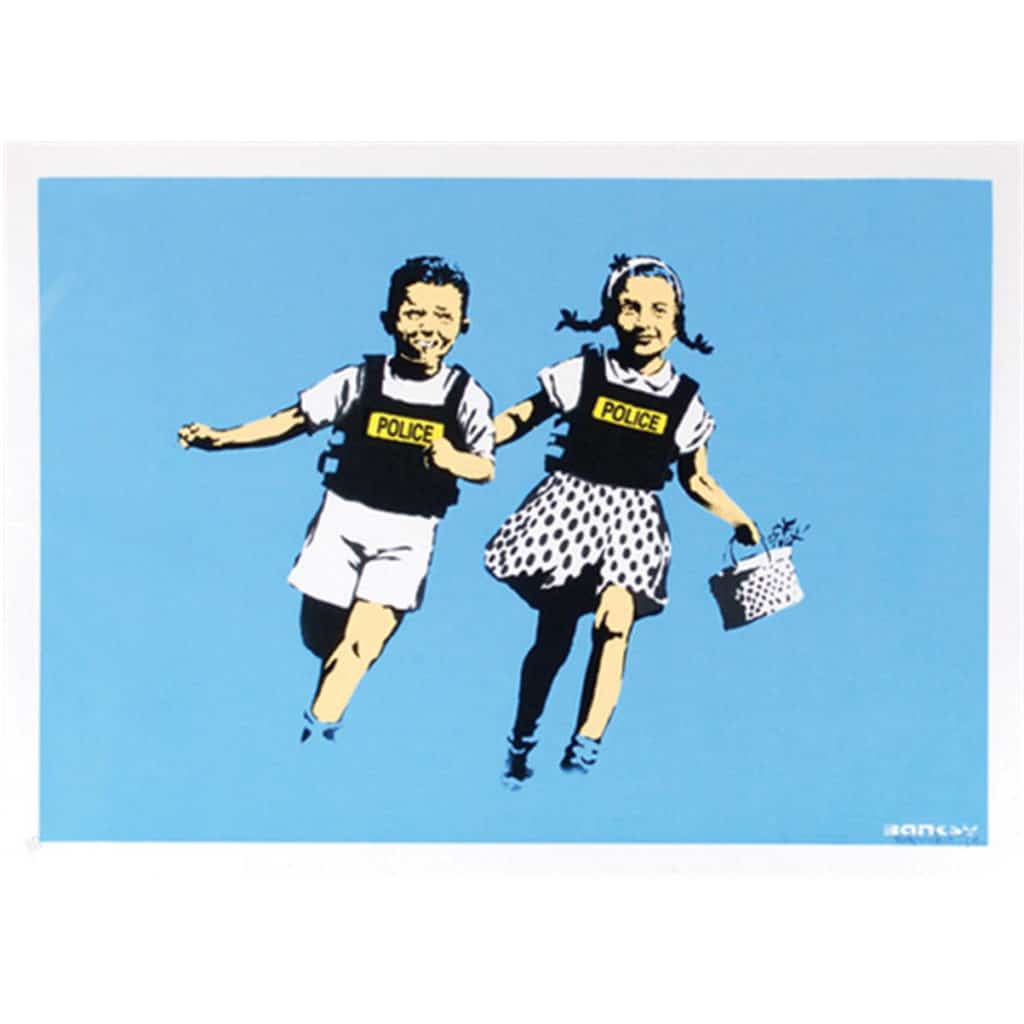 Banksy’s ‘Jack and Jill’, also referred to as ‘Police Kids’, is one of the few designs to be produced specifically for printed editions rather than originating as graffiti art. The image of two children running happily against a bright blue background was released in 2005 as a limited edition of 350 prints, with a smaller series later being released with a pink background.

The print, titled after a traditional English nursery rhyme, portrays two children, a boy and a girl, running towards the viewer in Banksy’s characteristically black and white stencil style. Laughing and carrying flowers, the children wear conspicuous bullet proof vests with the inscription ‘Police’ in capital letters.

If Banksy’s murals often convey anti-police sentiments, seen an institution that limits people’s freedom, its association with children is bewildering and disturbing. This troubling juxtaposition is made even starker by the light, uniform background, which reinforces the children’s associations with timeless innocence, as well as the sinister verses of the nursery rhyme, which alludes to the children falling down a hill. The artist’s trademark dark humour is particularly ambiguous here: is this a bitter commentary over the overabundance of children safety regulation, or is the artist implying that children themselves are learning to be part of an oppressive establishment?

Such ambiguity and multiplicity of interpretation is what makes Banksy’s images so powerful. Now synonymous with an underground culture fighting against an increasingly militaristic society, Banksy’s ‘Jack and Jill’ is a poignant parody of western ways of life. 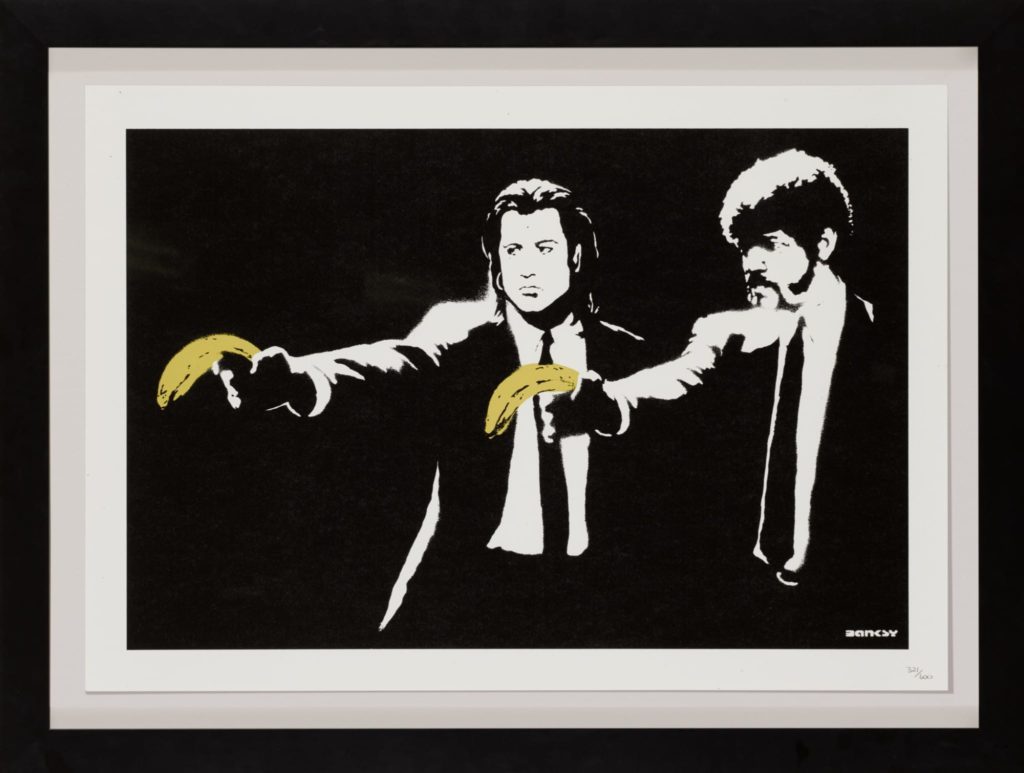 Banksy’s art frequently appropriates elements from pop culture, juxtaposing contrasting images and narratives. One of his most famous murals is ‘Pulp Fiction’, which represents a famous scene from the 1994 film of the same name by Quentin Tarantino. In the scene, the two characters Vincent and Jules, played by Samuel L. Jackson and John Travolta, are seen pointing a gun side by side. In Banksy’s rendition, however, the weapons are comically substituted by bananas.

The image first appeared in 2002 as a graffiti on a wall near Old Street Station in London. Gaining immediate popularity, in 2004 it was released as a small edition of official prints with the image currently being mass-produced as commercial merchandise.

The mural offers a defiant perspective of American culture and the way it is represented in media. An irreverent parody of a film known for its continuous raw violence, it seems to constitute a political statement about controversial American policies on both foreign intervention and rules on gun ownership. Possibly also a visual quotation of Warhol’s album cover for The Velvet Underground & Nico, bananas have several connotations, both in the political sphere (as in the sentence ‘banana republic’) and in colloquial speech (‘going bananas’).

Regardless of the interpretation, Banksy’s artwork remains particularly influential. When the council covered the mural in 2007, claiming it encouraged crime, a graffiti artist painted the words ‘Come Back’ in its former place. In response, Banksy reproduced his original work on the same wall, making it even more irreverent: the characters now held real guns, but were wearing banana costumes instead. 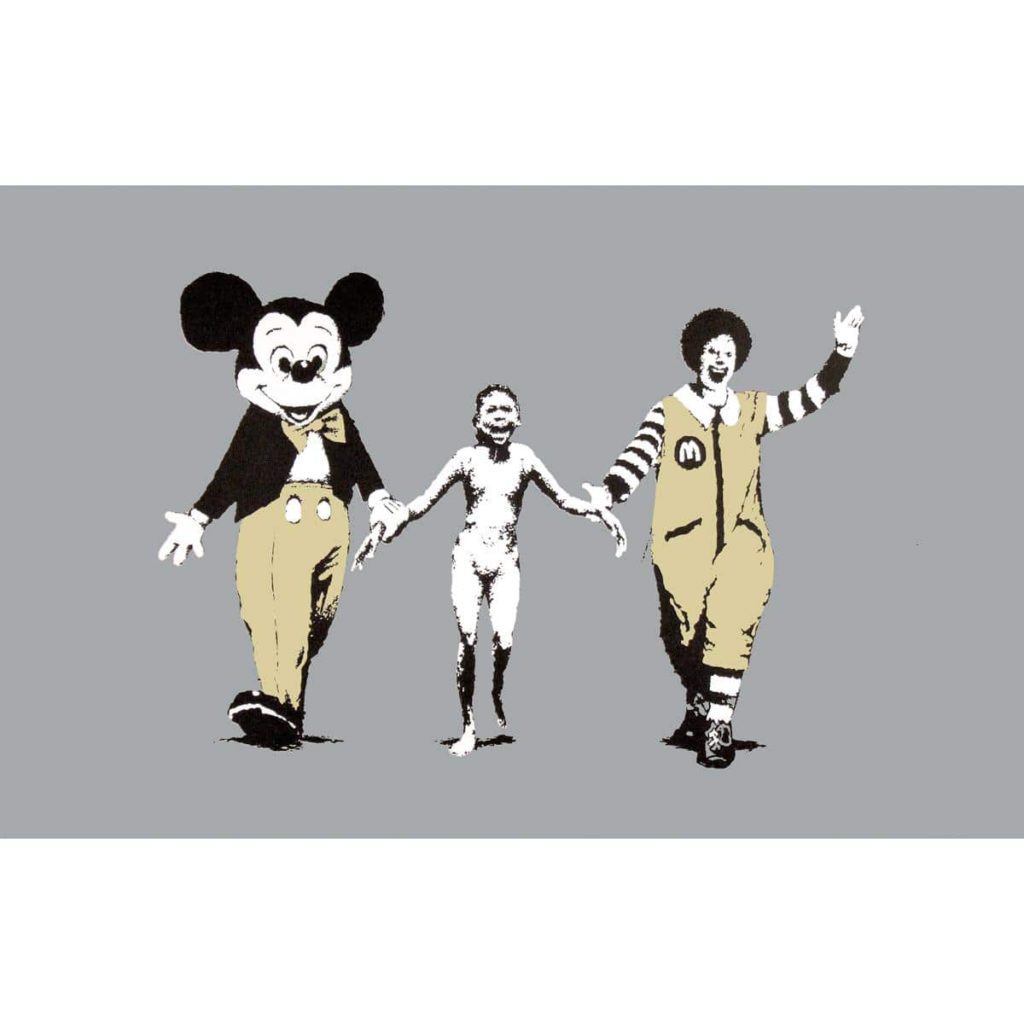 ‘Napalm’, also known as ‘Can’t Beat That Feeling’, is one of Banksy’s most haunting and powerful images. It depicts the nine-year-old Phan Thi Kim Phuc running away from a napalm blast, a scene borrowed from the famous photograph ‘The Terror of War’ (1972) taken in Vietnam by Nick Ut. This shocking image is juxtaposed by the popular characters Mickey Mouse and Ronald McDonald, who hold the girl’s hands while bearing disturbing grins.

The print was made in 2004 and since then has become a symbol for worldwide struggles against war, imperialism and consumerism. Banksy appropriated the original anti-war message of Ut’s photograph to reference current events, such as Britain’s and the United States’ military interventions in the Middle East.

The two brand mascots are generally associated with childhood innocence and American culture, as well as the world of fantasy and escapism. However, they appear in this image as impervious to the young girl’s scream, seemingly guiding her into a grim future. Perhaps, the artist wanted to suggest that all children are unwittingly being let into a future in which they are seen as consumers rather than individuals.

The image’s alternative title, ‘Can’t Beat that Feeling’, is borrowed from a famous Coca-Cola slogan of the 1990s, another reference to consumer culture and the ubiquity of advertisement. Banksy exposes its violent implications through a word play on the double meaning of the term ‘beat’. Regardless of its name, ‘Napalm’ and its sombre warning against corporate power has now become an international symbol for the struggle against hate, violence and greed. 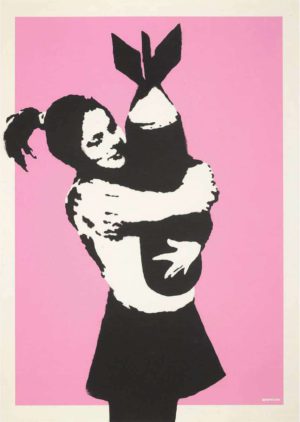 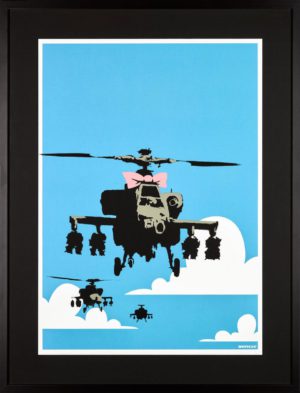 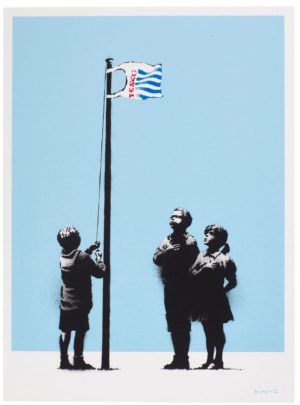