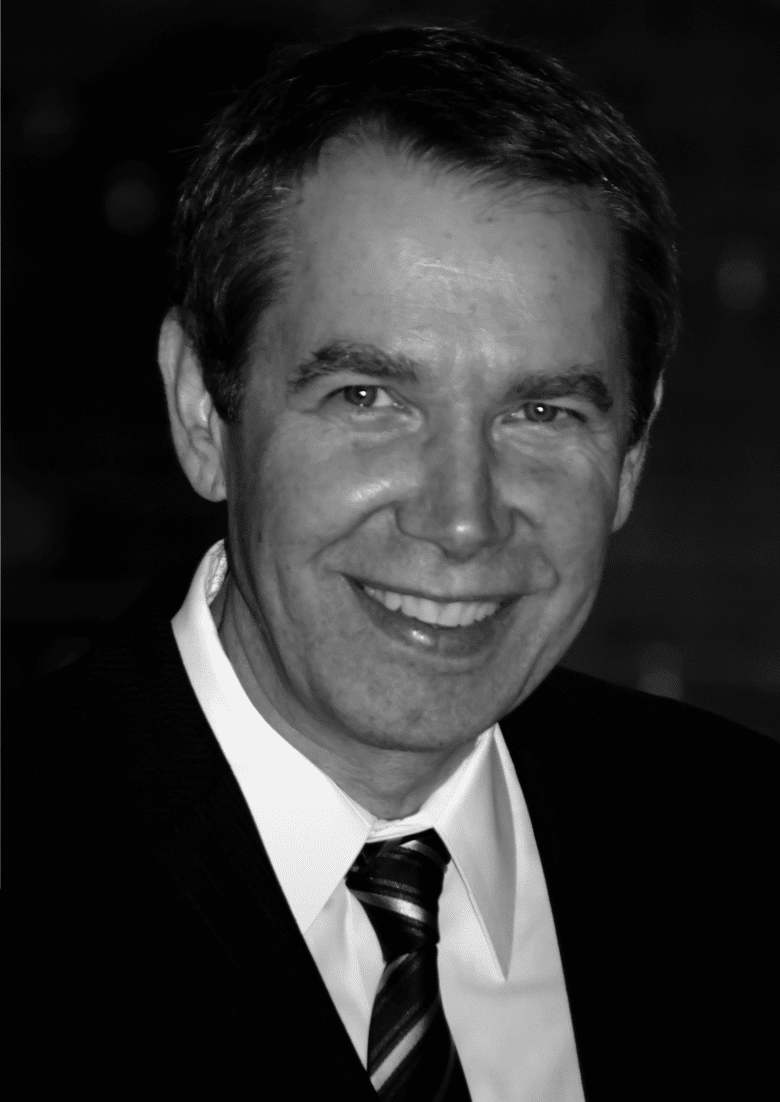 Jeff Koon’s spectacular works, which include floating basketballs, vacuum cleaners, inflatable flowers, pornographic images and metallic bunnies, are defined by the constant attempt to communicate with the masses. Born in York, Pennsylvania, he studied at the School of the Art Institute of Chicago and later at the Maryland Institute College of Art, subsequently moving to New York. He began producing his readymade-inspired series in the 1980s, when he exhibited his series ‘The New’, consisting of vacuum cleaners sealed in plexiglass boxes. Across his career, Koons explored the themes of perfection, remoteness and fetishisation, which are reflected in his choice of stainless steel as favoured material. Sleek, pristine and mirror-like, his sculptures combine a Minimalist aesthetic with bright colours and illusory forms.

Floating basketballs, pristine vacuum cleaners, inflatable flowers, pornographic canvases and metallic bunnies characterise only a handful of artworks that define Jeff Koons’ eye-catching oeuvre. Koons’ artistic intention is to communicate with the masses, a mission he achieves by characteristically combining his inventive manipulation of everyday images and objects with art historical references. In decontextualizing these images and questioning mainstream understandings of vernacular images and objects, Koons’ work is evocative of Duchamp and Warhol.

Koons, born in York, Pennsylvania, pursued his early interest in art at the degree level, studying first at the School of the Art Institute of Chicago and later at the Maryland Institute College of Art. He then moved to New York where he famously worked at the membership desk at the Museum of Modern Art. Koons caught the attention of employees and museum goers alike with his elaborate clothes and sales prowess.

Koons’ breakthrough in his art career came in the early 1980s with his series ‘The New’. In part inspired by Duchamp’s readymades, the series consists of vacuum cleaners isolated inside plexiglass boxes. Crucially, these vacuums are unused, suspended in a state of perfection. Originally exhibited in the windows of the New Museum, the vacuums appeared to be commercial appliances, not works of art. The aesthetic of ‘The New’, which confused pedestrians in the market for a new vacuum, explores the fetishization of the object through its tantalizing untouchability.

This preoccupation with perfection is consistent across Koons’ oeuvre as his work consistently removes the trace of the artist’s hand in his depictions of objects of popular culture. This is no truer than in his series ‘Banality’ (1988) which depicts figures from a gold Michael Jackson reclining with his monkey to St John the Baptist, sculptures reminiscent of kitschy souvenir shops.

Yet another defining characteristic of Koon’s work is his deep focus on materiality as means for innovation. This is particularly notable in his inflatables which he later rendered in heavy aluminium, though he nonetheless captured the flimsy vinyl and kitschy figures by using detail-oriented moulding and clever painting.

The material most widely associated with Koons is stainless steel, which produces mirror-like surfaces. A nod toward Minimalism, these sleek and pristine surfaces reflect back onto the viewer who completes the artwork. His most famous stainless steel sculptures are ‘Balloon Dogs’ (1994-2000), which call on the logic of his inflatable works. The fragile material of the balloon, vulnerable to popping at any moment, is translated into steel which eliminates the malleability of the object. Still, the twists and the turns used to create a balloon animal are immortalized here in steel.

Using materiality and popping colour, Koons also brings historical imagery into the contemporary period in an easily digestible way. Notably, Koons’ ‘Balloon Venus (Magenta)’ (2008-2012) is a nod to the ‘Venus of Willendorf’, which is considered to be the first artwork in existence. Using computer imaging, Koons replicated Venus’ famous curves in a manner that recalls the twisting of balloon animals.

Koons’ partnership of image and materiality cleverly reconsiders our understanding of everyday imagery, be they vacuums or ancient statues. Through juxtapositions and illusions, his work transcends artistic generations, carving himself a unique place in the art historical canon. 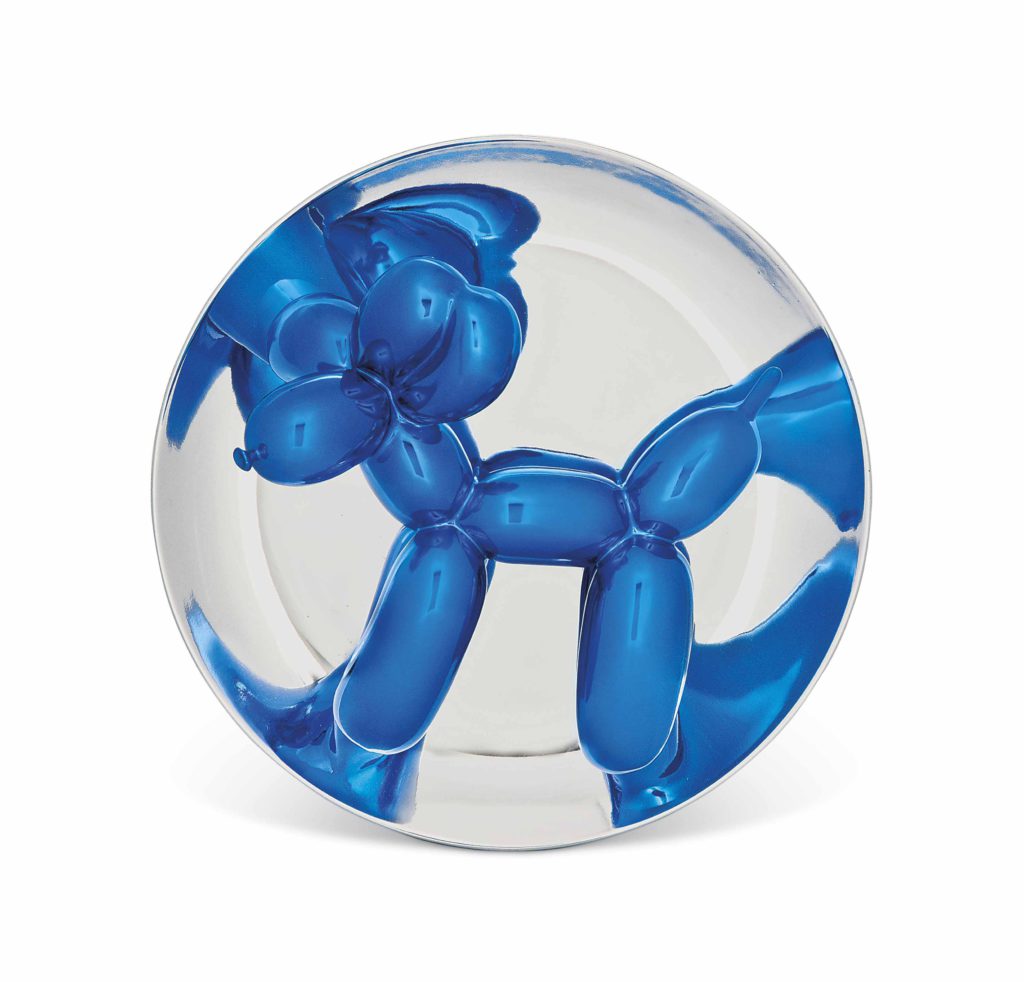 Jeff Koons tantalises viewers with colour, surface and his uncompromising perfectionism in his ‘Balloon Dog’ sculptures and paintings within his ‘Celebration’ series, began in 1993. Using imagery recollective of childhood innocence, Koons equates balloon dogs to people to interrogate issues of human nature.

From 1994-2000, Koons produced his original range of monumental ‘Balloon Dog’ stainless steel sculptures, standing at approximately three metres tall and nearly four metres wide. They captivate with their electric blue, magenta, yellow, orange and red colours. Despite the tough material, Koons captures the flimsiness of the balloon that permits twisting and turning. The dogs are perfectly proportioned, their surfaces absolutely pristine and mirror-like.

‘Balloon Dog’ aims to capture the pure joy of childhood using universally recognised, festive objects. Speaking of the series, Koons stated ‘it’s a very optimistic piece, it’s a balloon that a clown would maybe twist for you at a birthday party. But at the same time it’s a Trojan horse. There are other things here that are inside’.

Inside Koons’ Trojan horses are sexual connotations, marked by the desire alluded to in their shiny surfaces and phallic tails. There are also psychological dimensions as the viewer completes the works, allowing their emotional and intellectual responses to fill the horses. The sculptures also nod to our mortality as balloons are inherently unstable, capable of popping at any moment or slowly dying as the air drains out.

Following the exceptional popularity of ‘Balloon Dog’, Koons partnered with the French porcelain company Bernardaud to produce limited edition ‘Balloon Dog’ sculptures. These sculptures, found in the same colours and forms as their larger predecessors, are mounted on shiny silver plates. Though small, these editioned sculptures nonetheless carry the weight and connotations of the originals. 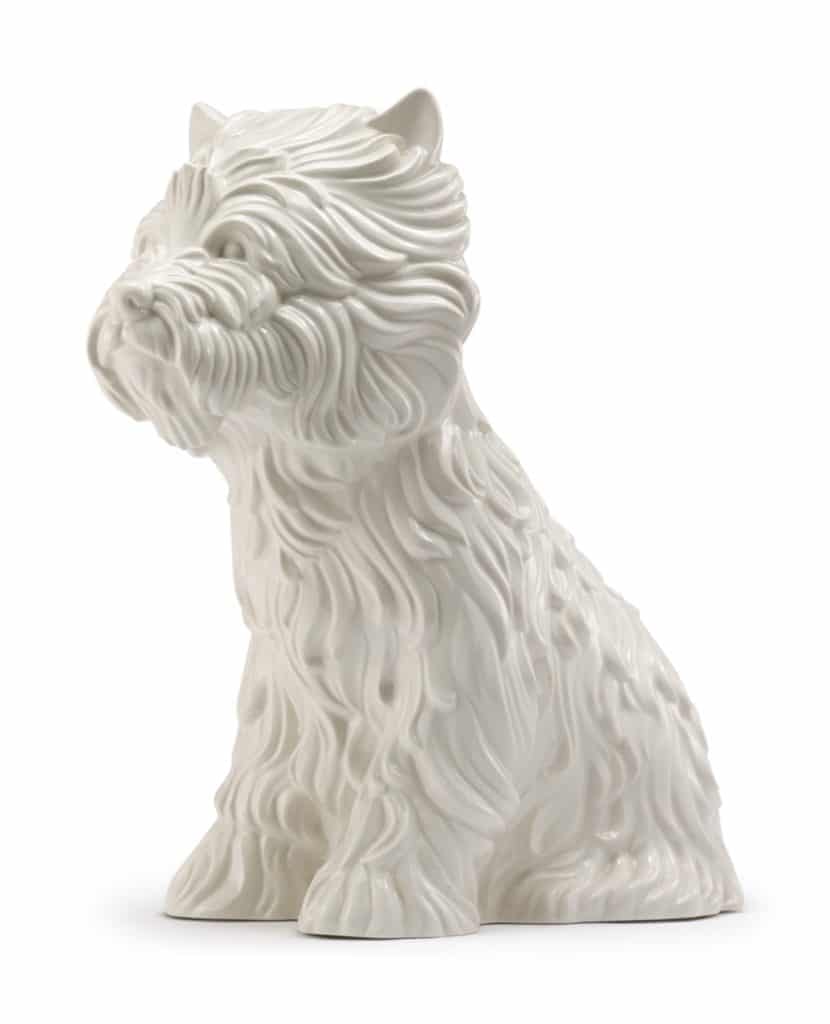 In 1992, Jeff Koons installed ‘Puppy’ outside the doors of the Guggenheim Bilbao in Spain. Though towering at approximately 12 metres high, the West Highland Terrier puppy, sitting on its back legs and covered entirely in flowers, is anything but intimidating. Since then, Koons has continued to recreate the sculpture in numerous forms, always combining the puppy with flowers.

For this series, Koons uses a West Highland Terrier on the basis that it is gender neutral: ‘If I had done a poodle, it would have seemed very feminine. And if I had done a Doberman or a sheep dog, it would have come off as masculine’. Koons also characteristically pulled inspiration for ‘Puppy’ from high and low culture – the elite world of topiary and dog breeding with references to chia pets. His intention is to be inclusive and to not alienate his audiences.

Koons’ original ‘Puppy’ and the flower-covered sculptures that followed, are works of Process Art. That is, over time the sculpture will change as the flowers bloom and grow, making ‘Puppy’ appear bushy and unruly, before the flowers slowly die.

Koons developed his original ‘Puppy’ into further installation works and smaller sculptures. These include ‘Flower Puppy’ (1992), a plastic sculpture covered in dried flowers, and ‘Puppy (Vase)’ (1998), a white puppy with carefully sculpted fur which acts as a flower vase.

Speaking of the ‘Puppy’ series, Koons stated ‘I’ve made what the Beatles would have made if they had made sculpture’. In adopting everyday imagery into his own unique style, Koons’ sculptures successfully ‘communicate happiness’. 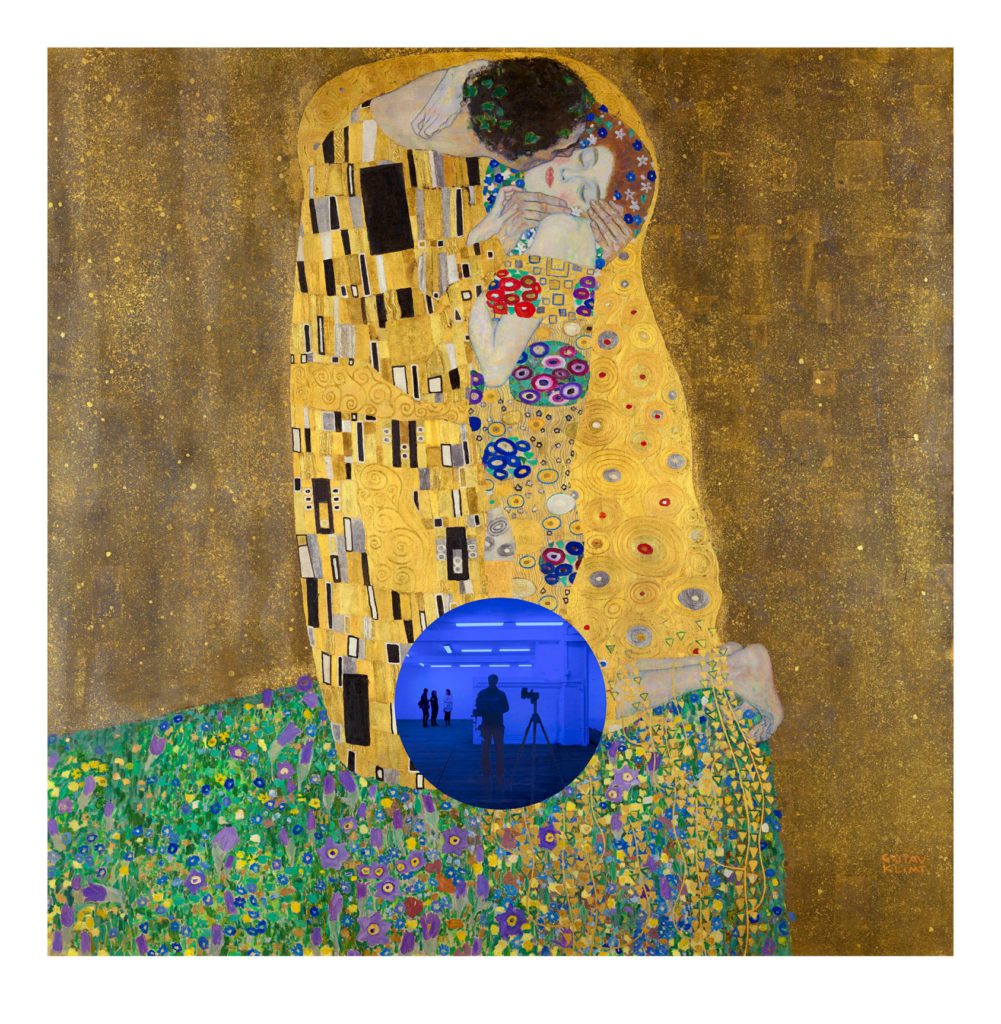 Among the themes Jeff Koons consistently returns to is the role of the viewer, explicitly done in his ‘Gazing Balls’ series. From 2013, Koons joined historical sculptures and paintings, as well as everyday objects, with a cobalt, reflective ball. Resultingly, Koons creates an experience that ‘is about you. Your desires, your interests, your participation, your relationship with this image’.

‘Gazing Balls’ was originally conceived as a series of sculptures and paintings modelled after generative works that were most important to Koons, such as Duchamp’s ‘Bottlerack’ (1914), Klimt’s ‘Kiss’ (1908-97) and Perugino’s ‘Madonna and Child with Four Saints’ (1500).

The sculptures were plaster casted while the paintings were hand painted, stroke by stroke. Koons avoided replicating the paint and the sense of depth of the respective originals. Instead, as these works were not meant to be paintings or sculptures but ideas of them, the works were intentionally painted to appear flat.

A single, reflective ball is attached by a shelf to these paintings or rests on the sculptures. Placed at the viewer’s height, the pristine ball acts as mirrors that allows viewers to complete the work. Now immersed in the artwork, the viewer is forced to reflect on the act of viewing, something that Koons believes to be as important to the originals’ art historical relevance as their content.

Perennially influenced by Duchamp’s readymade, Koons’ ‘Gazing Balls’ series recalls the logic of ‘L.H.O.O.Q.’ (1919) and follows the centuries-old pattern of referencing the great artists that came before. Speaking of his choice to overtly reference the historical works, Koons stated ‘Monet is always referencing Rubens…Manet is referencing Raphael…everybody enjoyed Titian’. 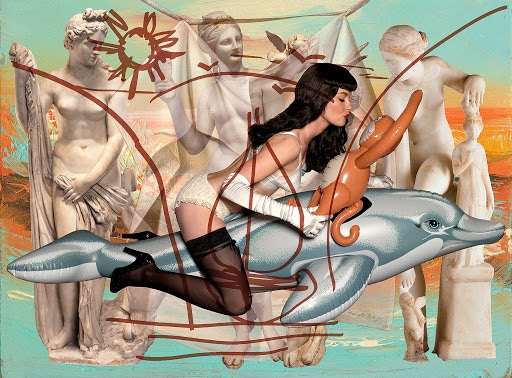 From 2008, Jeff Koons assembled his ‘Antiquity’ series of paintings, prints and sculptures that engage with notions of femininity, fertility, beauty and life energy from antiquity to present. Characteristically relying on references to moments in art history, Koons brings his subjects into the present day through material, technique and colour.

Included also is ‘Seated Ballerina’, a blonde ballerina leaning over to fix her shoe. Inspired by a turn of the century Russian porcelain ballerina, this sculpture is rendered in wood or stainless steel and in a variety of sizes. Koons stated that it ‘is like a Venus…It is really about beauty and even a sense of contemplation, a sense of ease’.

The series becomes surreal in his collage-like paintings, later translated into prints. In ‘Antiquity 3’ (2009-11), against an abstract blue and orange background are Greco-Roman sculptures of Venus in varying positions and states of nudity. They are overlaid with a photorealistic depiction of the actress Gretchen Mol as Bettie Page, sitting on top of an inflatable dolphin while kissing an inflatable monkey. These images are once more overlaid with Koons’ gestures, referencing Courbet’s ‘Origin of the World’ (1866) and conflating centuries of notions of beauty.

In referencing moments from across art history and his own career, Koons produced what may seem like a formally disjointed series. However, this varying aesthetic is intentional and reflective of Koons’ investigations into the breadth and depth of the visual translations of transhistorical notions of womanhood and femininity.

In 2000, Jeff Koons revealed his monumental floral masterpiece, ‘Split Rocker’, in the courtyard of the Palais des Papes in Avignon, sparking what would become one of his most popular series. This public sculpture, reminiscent of childhood toys, is covered in flowers and imbued with a vigorous sense of life. As is true across Koons’ oeuvre, it is imbedded with allusions to mortality and art historical references.

‘Split Rocker’ joins a pony toy rocker, derived from his son’s own rocker, and a dinosaur one. The head of each is split in half and fused together, the eyes lopsided and the rocker handles protruding from either side.

The outdoor sculptures from this series are covered in millions of flowers which rely on an irrigation system. Koons note that this reliance is part of the artwork and reason for its popularity. That is, through its complex internal structure, the fragile line between the life and death of the flowers can be controlled.

The references within the sculptures are extensive. The inexact alignment of the rocker heads, which leave gaps at the seams, recall Cubist construction, the use of existing objects as the basis for reimagining the everyday echoes the Duchampian logic of the readymade and the carefully managed flowers recalls Baroque topiary sculptures.

Since its debut, ‘Split Rocker’ has been installed at other public venues such as Rockefeller Plaza in New York and the Chateau de Versailles. In 2012, Koons partnered with the French porcelain maker Bernardaud to produce a limited edition range of ‘Split Rocker’ sculptures. These porcelain white sculptures act as a vase, vessels that, like the irrigation system of the public works, control the inherent duality of life and death. 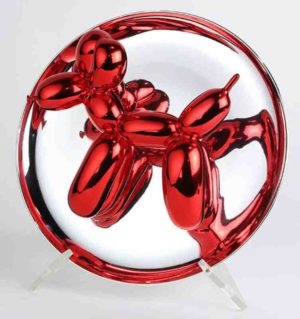