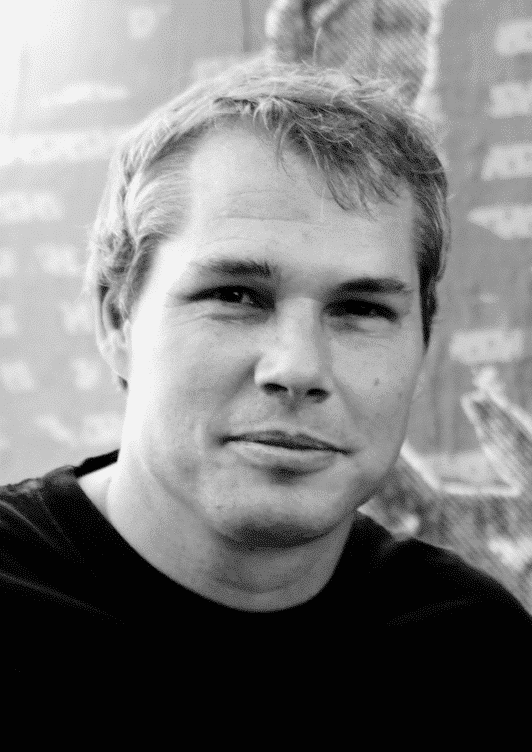 The American street artist and graphic designer Shepard Fairey is internationally known as the founder of the OBEY label and creator of the iconic Barack Obama ‘Hope’ poster, produced for the occasion of his 2008 US presidential campaign. Emerging from the urban skateboarding and graffiti scene of the 1980s, Fairey’s bold visual style is based on simplified, instantly recognisable images. Fairey’s work is heralded for its radical disruption of accepted social conventions surrounding consumption and control of public space, turning his stickers and posters into powerful and provocative forms of social critiques.

The American street artist and graphic designer Shepard Fairey is internationally known as the founder of the OBEY label and creator of the iconic Barack Obama ‘Hope’ poster, produced for the occasion of his 2008 US presidential campaign. Emerging from the urban skateboarding and graffiti scene of the 1980s, Fairey’s bold visual style is based on simplified, instantly recognisable images.

Born in Charleston, South Carolina in 1970, Fairey moved to Rhode Island in 1988 to attend the Rhode Island School of Design, from which he graduated in 1992 with a degree in illustration. During his years at the RISD he created his influential sticker campaign ‘Andre the Giant Has a Posse’, featuring a stylised portrait of the wrestler. This image later evolved into his ‘Obey’ series, which reinterprets Andre Roussimoff’s features in a stencil‐like, stylised form. The design made Fairey internationally famous thanks to a network of artists who replicated it. Inspired by John Carpenter’s sci‐fi movie ‘They Live’ (1988), which denounced the perversions of consumerism in America, the ambiguous ‘Obey’ stickers are meant to encourage people to investigate their unexplained appearances and question their relationship to urban space. As Fairey explained, ‘the sticker has no meaning but exists only to cause people to react, to contemplate and search for meaning in the sticker’.

Following graduation, Fairey founded the printing business ‘Alternate Graphics’ in Rhode Island, before producing a movie about his work as a street artist titled ‘Andre the Giant Has a Posse’ (1995). After working alongside several graphic design studios specialising in guerrilla marketing, music album covers, posters and band merchandise, he produced hundreds of thousands of posters and stickers bearing his widely known ‘Hope’ design in support of Obama’s candidacy for president. In 2017 he returned to the design which he reimagined to feature women of colour to express his opposition to Trump’s presidency.

Basing his aesthetic off those of artists such as Warhol, Haring and Banksy, Fairey aims to break boundaries between ‘high’ and ‘low’ art, using a vast range of media, including prints, murals, stickers and posters, to express his own radical social critique. ‘Art is not always meant to be decorative or soothing’, he stated. ‘In fact, it can create uncomfortable conversations and stimulate uncomfortable emotions’. Open about his controversial methods and the political topics he addresses, Fairey contributes directly to these causes through raising awareness and financial donations. In an interview, he reclaimed his status as a populist artist: ‘I want to reach people through as many different platforms as possible’, he stated. ‘Street art is a bureaucracy‐free way of reaching people, but T‐shirts, stickers, commercial jobs, the Internet – there are so many different ways that I use to put my work in front of people’.

Fairey currently resides and works in Los Angeles. As well as populating the urbanscapes of major cities throughout the world, his designs are also held in internationally renowned institutions such as the Smithsonian, the Los Angeles County Museum of Art, the Museum of Modern Art in New York, and the Victoria and Albert Museum in London. His work is widely recognised for its radical disruption of accepted social conventions surrounding consumption and control of public space, turning his stickers and posters into powerful and provocative forms of social critiques. 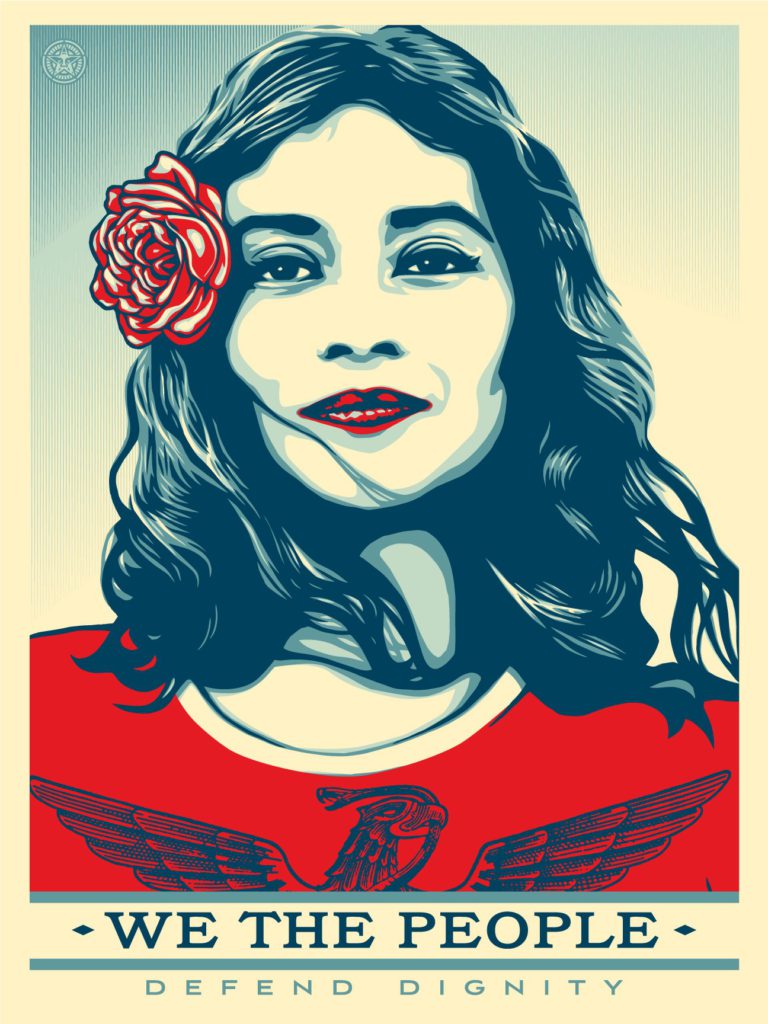 Shepard Fairey’s inspiring ‘We The People’ series was commissioned in 2017 by the Amplifier Foundation on the occasion to Trump’s inauguration. The series is composed of three red, white and blue images: a Latina with a rose in her hair, a Muslim woman wearing a hijab bearing the pattern of the American flag and an African American woman. These portraits reference the people who have felt attacked by the president‐elect.

Taking its title from the first line of the US Constitution, ‘We The People’ as both a phrase and a series conveys a message of inclusion and hope, which builds on Fairey’s iconic ‘Hope’ poster for Obama’s 2008 presidential campaign. In a statement on the series published onto his website, Fairey expresses a desire to ‘come together under a new symbol of hope— one that reminds us that OUR America is one of equal humanity, and does not demean or discriminate’. This message is echoed beneath each image, which reads ‘We The People’, followed in the image of the Latina by the phrase ‘Defend Dignity’, by ‘are Greater Than Fear’ in that of the Muslim woman and by ‘Protect Each Other’ in that of the African American woman.

‘We The People’ was published prior to the 2017 inauguration, with the proceeds used to pay for ads in newspapers like ‘The Washington Post’ and ‘The New York Times’. The prints were also available for download on Fairey’s website, encouraging people to bring the newspapers and prints to the inauguration. Remarking that the series does not aim to imitate the divisiveness of the election or the period that followed but is instead a reminder for ‘people to find their common humanity, and look beyond maybe one narrow definition of what it means to be American’. 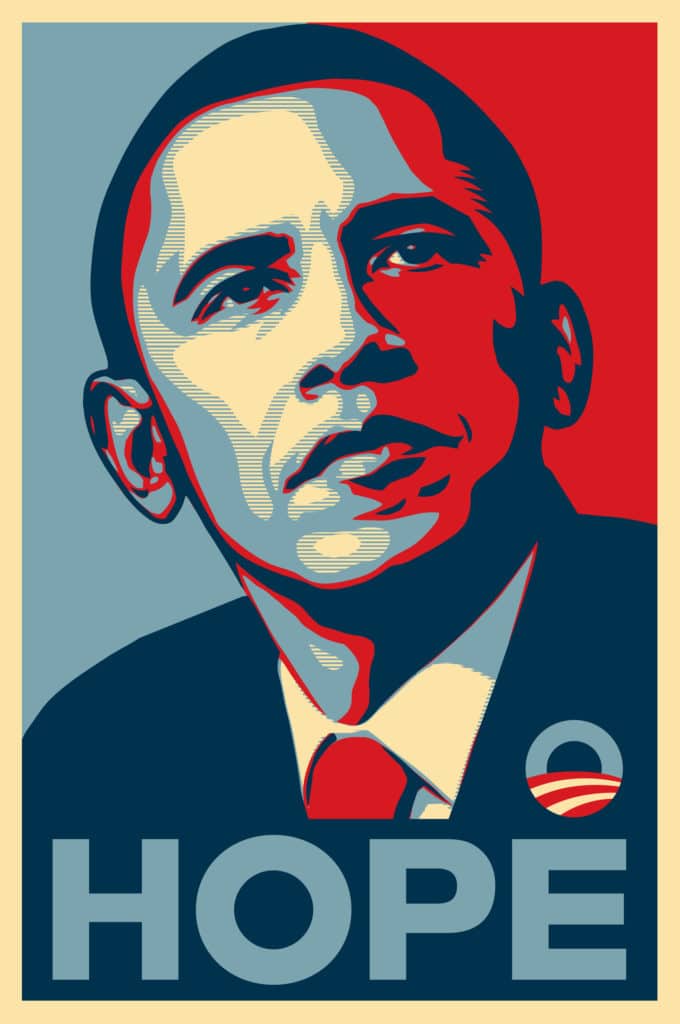 Since his internationally recognised 2008 poster ‘Hope’ produced for the occasion of Barack Obama’s presidential campaign, Shepard Fairey has become ubiquitous for this historic presidential bid. Based on a photograph of Obama taken by Mannie Garcia two years prior, the poster portrays Obama in red, white and blue as he looks pensively into the distance. This powerful image was first used by Fairey to accompany the text ‘Progress’ before it evolved into its second and most influential version, ‘Hope’. In both instances, above the last letter of the bold text is a rising sun, the logo for the Obama campaign.

Fairey’s ‘Hope’ posters received the blessing of the Obama campaign but was not funded or commissioned by it. Instead, this grassroots campaign was inspired by the artist’s belief in Obama’s bid for presidency. Having perceived Obama’s only roadblocks to the White House as being his race and his public recognition, Fairey conceived of his poster as a means to provide a remedy. ‘In creating a poster that represented him as having a vision, with a stylised and idealised treatment, in a red, white and blue colour combination, I felt I could implicitly portray Obama as established enough to be worthy of an idealised portrait, almost like a two‐dimensional statue – patriotic and American rather than being of any specific race’.

The success of ‘Hope’ cannot be understated: it has been translated into stickers, t‐shirts, tote bags and other merchandise, and has been considered by many as a great contribution to Obama’s
electoral victory. Fairey has continued to create prints of Obama after ‘Hope’, including his 2009 ‘Be the Change’ print, produced on the occasion of his inauguration. 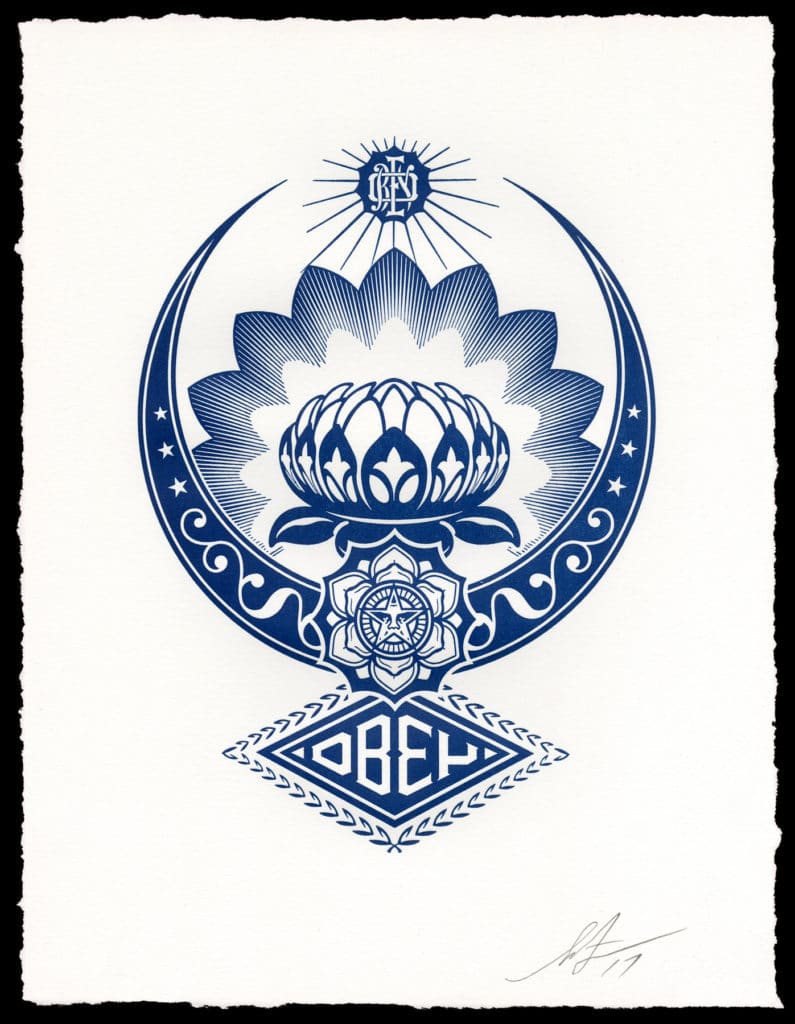 Constantly innovating within his own visual language to convey prevailing subjects and themes, Shepard Fairey nonetheless continues to return to one of his favoured motifs: the lotus flower.
Portrayed as a singular graphic image as in ‘Lotus Diamond (Gold)’ (2011) or as an accompanying element to a central image as in ‘Oil Lotus Woman’ (2018), the lotus acts as a captivating motif with the power of drawing viewers in.

Describing his own attraction to the flower, Fairey notes the powerful lifecycle of the lotus, which has awarded it a sacred status. Daily, the lotus emerges from the mud or dirty water clean and entirely unscathed by its surroundings, rendering it a symbol of hope and purity. Fairey makes the symbol his own through his characteristic graphic style involving blocks of contrasting colours. Also, his lotuses are often accompanied by his signature ‘Andre the Giant’, what is now considered to be his logo, at the centre of the flower or elsewhere in the image.

‘I see the lotus as a metaphor for what is especially needed in this moment… an effort to lift ourselves out of the mud of political and environmental irresponsibility in pursuit of harmony with each other and the planet’, said Fairey who argues that his lotuses do not attempt to make political statements or address social issues. It instead acts as a powerful and beautiful image of hope in spite of adversity, which can be appealing to all. In this sense, Fairey also uses his lotuses as what he calls a ‘Trojan Horse’, a tool to draw viewers into his works, regardless of their political affiliations. In doing so, he can bring people into conversations they may otherwise not enter into, as in works like ‘Lotus Angel’ (2020), made in response to the COIVD‐19 pandemic. 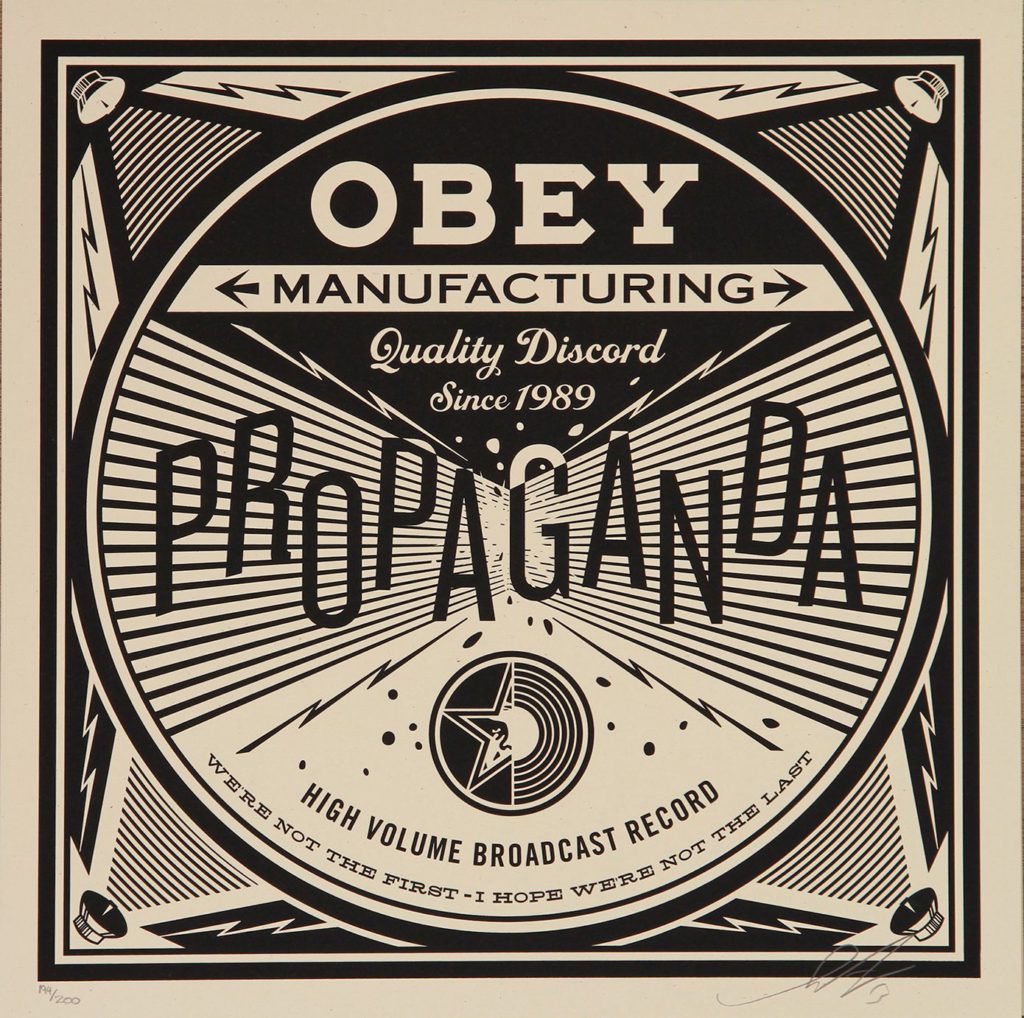 In 2015, after showing at Robert Berman Gallery in Santa Monica and Stolen Space Gallery in London, Shephard Fairey unveiled his ‘50 Shades of Black’ series (2014) at Subliminal Projects in Los Angeles. The space was equipped with a DJ and endless troves of Fairey’s own record collection, which visitors were encouraged to sift through and play. It was in this context that his ‘50 Shades of Black’ series of 50 energetic prints modelled after 12‐inch record covers were justly exhibited.

Fairey has long been influenced by music, being himself also a DJ. Since 2006, he has taken the format of the record to his own work, noting his particular fascination with the packaging of a circular record inside a square cover. Such is present in ‘50 Shades of Black’, which range from black designs on cream backgrounds, or black and red on cream, as a large portion of the square works are
compositionally arranged around a circular form. The visual language of the record is further imitated by Fairey’s use of ‘OBEY’, his company which has become synonymous with his work as an artist. With text like ‘OBEY RECORDS’ and ‘OBEY SOUNDS’, ‘OBEY’ takes on the form of a record label in these prints.

Fairey notes that he loves music for its accessibility and praises it for being ‘a democratic medium that can bring joy while also delivering provocative and compelling social commentary’. In ‘50
Shades of Black’, he aims to mirror these attractive qualities in the visual form. While some prints act as dedications to musicians like Black Sabbath and Joan Jett, others convey pro‐peace and anti‐war messages. Yet the series is nonetheless cohesive, cleverly unified by the consistent and widely digestible format of the record. 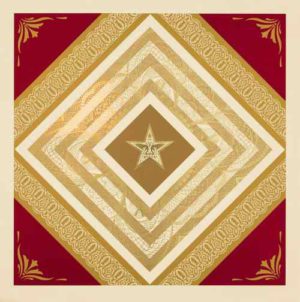 Power and Glory I 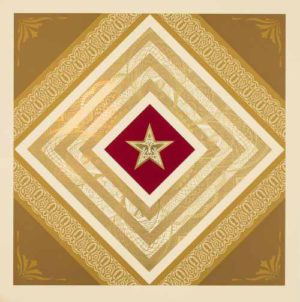 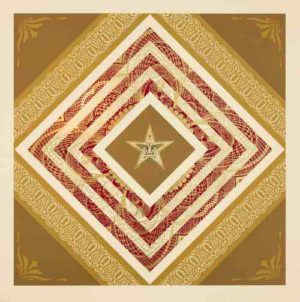 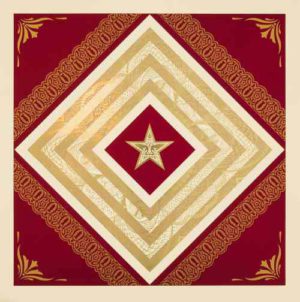 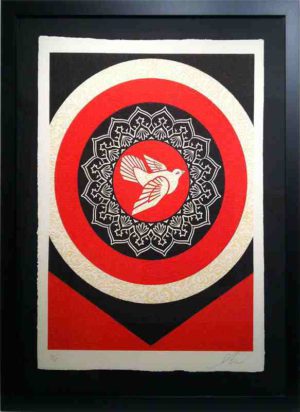 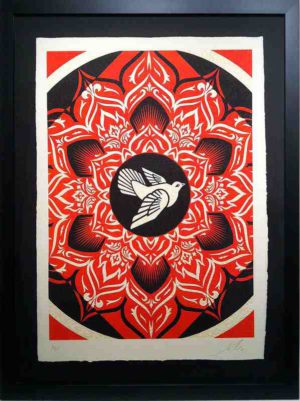