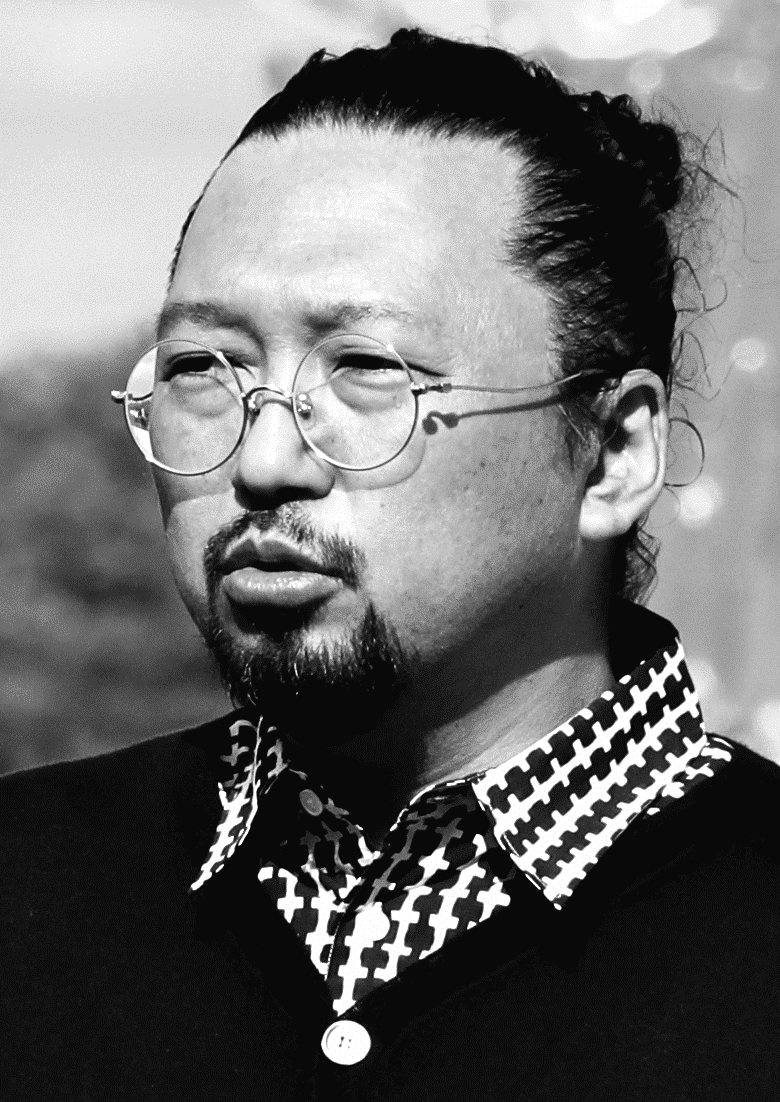 Often referred to as the ‘Andy Warhol of Japan’, Takashi Murakami has created his own world filled with characters like mushrooms, smiling flowers and busty women. His exceptionally colourful visual language conflates influences like traditional Japanese painting and anime with hallmarks of Western popular culture. In 2000 Murakami presented his generative Superflat theory which argues that contemporary Japanese art is reflective of the post‐war Japanese psyche. Superflat has since become his signature artistic movement, which has also been adopted by other Japanese artists. Effectively, Murakami’s often joyous works are also psychologically deep, blurring the boundaries between ‘high’ and ‘low’ art.

Takashi Murakami’s anime-inspired characters, collaborations with mega celebrities and fashion labels, use of popping colour, production at his factory-like studio and international critical acclaim has labelled him as the ‘Andy Warhol of Japan’. Armed with his pop culture characters, Murakami’s work, which spans painting, print, sculpture, fashion and film, continues to break down the divide between ‘high’ and ‘low’ art.

Murakami, born in 1962 in Tokyo, developed an early love for anime, manga and ‘otaku’ or ‘geek’ culture. He was also captivated by Western popular culture, naming George Lucas as a crucial early influence. Murakami later received his BA, MFA and PhD at the Tokyo University of Fine Arts and Music where he studied ‘nihonga’, traditional Japanese painting from the 19th century which combines Western practices with Japanese art.

The assortment of characters that populate Murakami’s work emerged from the 1990s. Fusing pop culture from Japan, the US and Europe, Murakami formed a line-up that includes mushrooms, smiling flowers, busty women and a wide-smile, Mickey Mouse-like figure called ‘Mr DOB’. Mr DOB, the shortened translation for ‘why?’ in Japanese, acts as Murakami. The character continues to evolve to reflect his life experience, from early cute and smiley formulations, reminiscent of the Japanese ‘kawaii’ culture, to menacing ones, with sharp teeth.

Crucially, in 2000 Murakami curated the exhibition ‘Superflat’ and compiled its accompanying manifesto that offers background to his aesthetic and those of the other artists in the exhibition. While his figures are bright, playful and recollective of popular imagery, they also explore the deeply rooted Japanese psyche and serve as Murakami’s sociocultural critique of his homeland.

This aesthetic emerges in his controversial sculptures ‘Hirpon’ (1997) and ‘My Lonesome Cowboy’ (1998), nude sculptural renditions of Eve and Adam. Murakami’s creation story exudes psychological trauma as the first woman and man are highly sexualised, portrayed with fluids emerging from their bodies.

Superflat also argues that there is no distinction between the ‘low’ art of otaku culture and traditionally conceived ‘high art’, effectively flattening the art world by placing all artists on an even playing field. This set the stage for Murakami’s endless list of collaborations, including Louis Vuitton. With Louis Vuitton, Murakami produced handbags, the designs for which he later used for a series of paintings and prints, confusing the boundaries between commercial art and ‘high’ art.

Since the beginning of his career Murakami has produced work that is inherently rooted in Japan, its culture and the events that define it. He fuses ‘low’ art, derived from his love for Japanese and Western popular culture, with ‘high’ art, emerging out of his Superflat aesthetic. Effectively, Murakami blurs the lines between ‘high’ and ‘low’ culture, between the East and the West, between past and present. 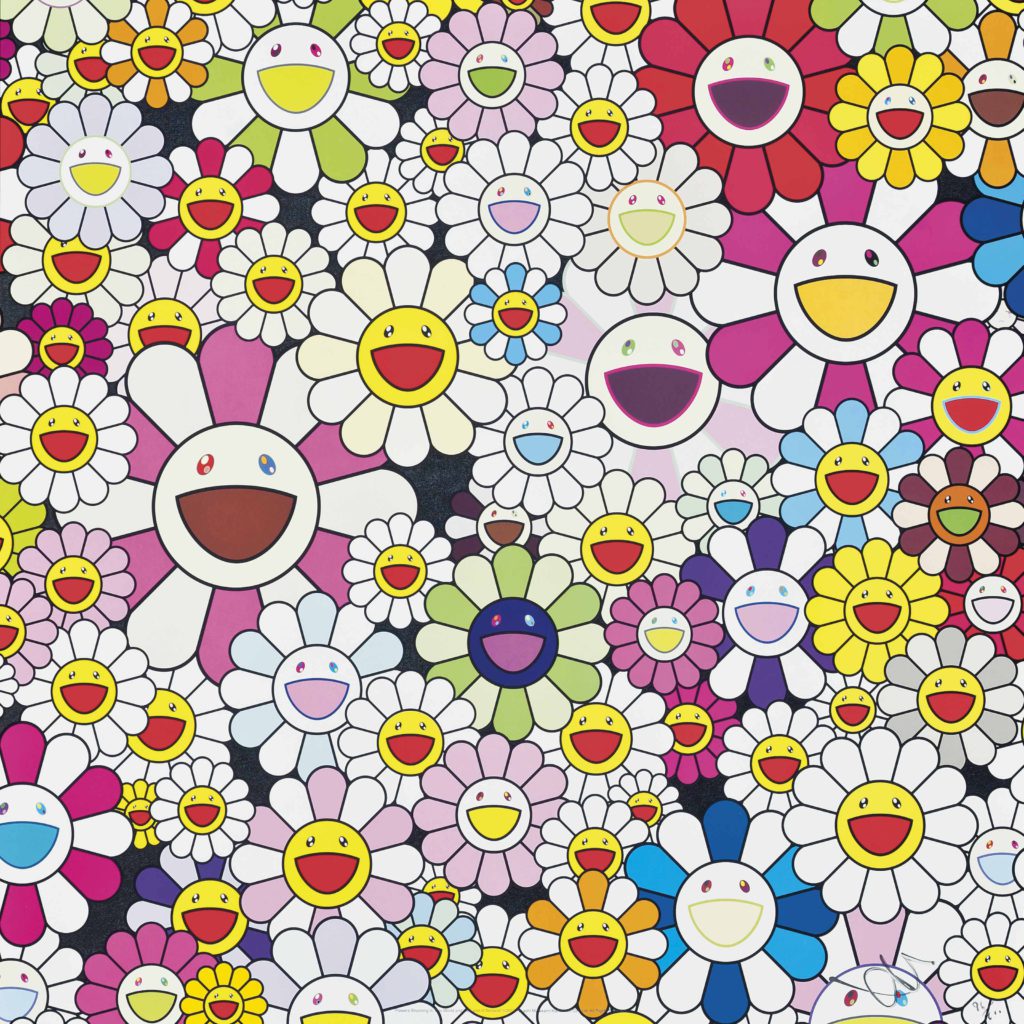 Encircled by 12 petals are smiling faces, grins that take over nearly the entire pistil of Takashi Murakami’s joyful flowers. Drawing on his experiences as an art student and teacher, as well as pulling Eastern and Western influences, Murakami continues to render across media his iconic flowers, flat entities that are nonetheless conceptually deep.

Murakami holds a PhD in ‘nihonga’, a traditional form of Japanese painting which involves much practice with flowers. However, his love for flowers blossomed after beginning teaching. Bringing fresh flowers for his students to draw, Murakami recalled ‘their smell, their shape – it all made me feel almost physically sick, and at the same time I found them very “cute”. Each one seemed to have its own feelings, its own personality’.

Murakami’s flowers are found in various colours and compositions, always maintaining the fundamental smiling, chrysanthemum-like image. Often, they are arranged in crowds, filling the entirety of the canvas or paper with their human-like faces. Too, they can be found covering a seemingly convex but nonetheless flat surface, an effect achieved through Murakami’s innovative solution: ‘You will note however that the petals in the foreground and their outlines are very much enlarged, and as you work out towards the edges, the size and the lines gradually get smaller and thinner. The effect produces an illusion of space or rather, of volume’.

Such cuteness pervades Murakami’s visual language and his Superflat aesthetic. It recalls not only nihonga practices but anime, a crucial part of modern Japanese culture and partially the product of the American invasion of the country during World War II. In effect, Murakami’s flowers superficially appear joyful and innocent but nonetheless carry with it the weight of a tumultuous history and memories of war. 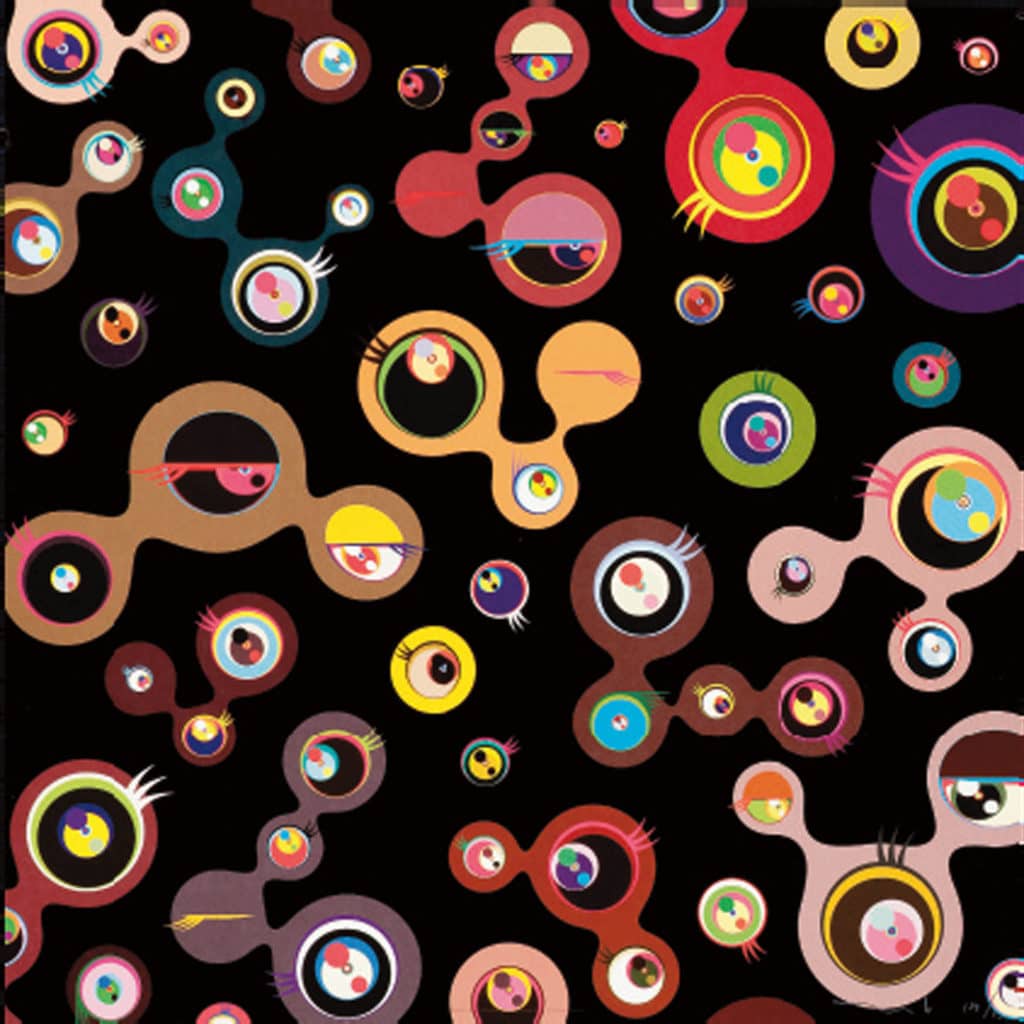 Takashi Murakami’s colourful world of characters and creatures is known for its fusion of Eastern and Western influences, his Warhol-like renditions of contemporary culture and events. This, too, can be said of Murakami’s ‘Jellyfish Eyes’ series, a range of paintings, prints and sculptures as well as a film.

A widely known manga character is Hyakume, a monster covered with a thousand eyes, was particularly influential for his ‘Jellyfish Eyes’ series. Too, Murakami was inspired by a childhood story of a girl terrified of a painting which she believed was watching her. This sentiment is echoed in Murakami’s works which also gives the impression of the viewer being watched. The artist stated that the vast amount of eyes in each piece ‘gives the impression that those living eyes are looking at the viewer who is himself looking at the work from different angles’.

‘Jellyfish Eyes’ acquired new meaning in 2013 when Murakami released his eponymous films which tells the story of a young Japanese boy in the wake of a recent natural disaster. The film recalls the horrors of the great tsunami and earthquake that devastated the country just two years prior to its release, effectively reinventing initial interpretations of the overall ‘Jellyfish Eyes’ series. Are the eyes not monsters that follow you and leave you struck with fear but metaphors for the unknown? Murakami leaves it open-ended: ‘In my artwork there is a really important concept I’m always working with, which is misinterpretation. Misunderstanding produces something new and interesting’. 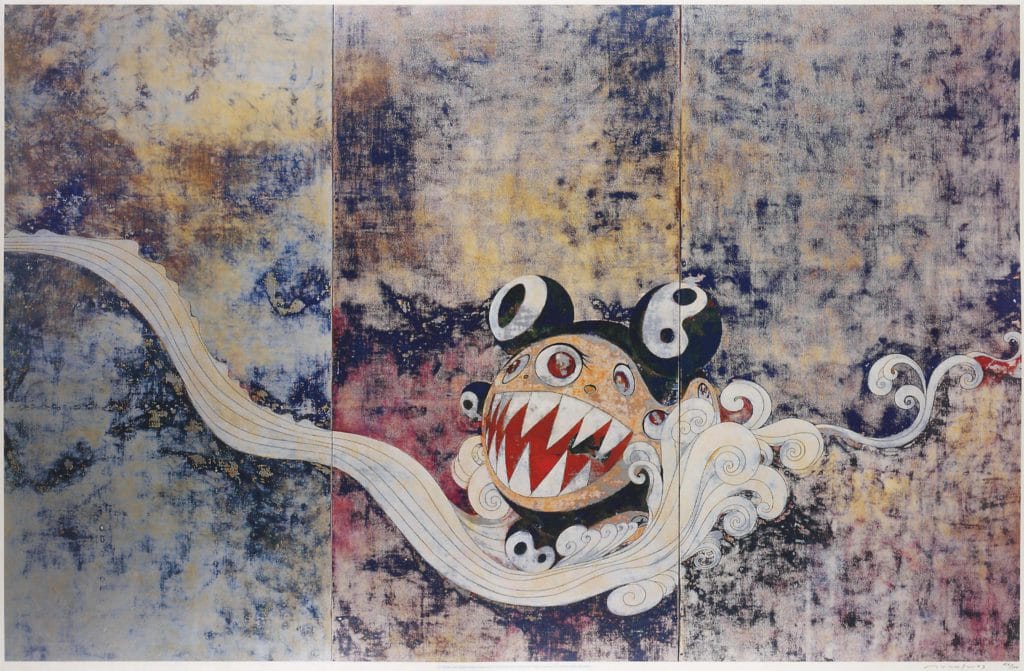 In 1996, Takashi Murakami produced one of his most iconic works to date, ‘727’. Produced prior to Murakami’s institution of Superflat, ‘727’, which evolved into a series of editioned prints, conflates traditional Japanese painting, the country’s modern visual language and references to recent traumas.

Murakami’s most iconic character, Mr DOB, is at the centre of ‘727’. This manga infused, Mickey Mouse-like character with multiple eyes exposes its fiercely sharp teeth as it lets out a seemingly maniacal laugh. Understood as Murakami’s alter-ego, Mr DOB is interpreted as laughing at the West, their beliefs and their art. This laughter is particularly resonant when considering the title, ‘727’, a reference to the American Boeing airplanes that flew over Murakami’s house as a child in post-war Japan.

This work takes influence from American culture and mocks it, all the while pointing to influential Japanese traditions. Mr DOB is shown riding a wave, an explicit nod to the acclaimed Hokusai print ‘The Great Wave off Kanagawa’ (1830-31). Too, the three-panelled background is recollective of Japanese privacy screens and is rendered according to the principles of traditional Japanese painting, ‘nihonga’. Murakami, who holds a PhD in nihonga, applied multiple layers of paint which he then systematically scratched away.

Since ‘96, Murakami has translated ‘727’ into editioned prints in which he alternates the colours and amends the backgrounds. With each alteration, the fundamental image exudes differing opinions on the Japanese relationship with the United States. Yet, what remains consistent is the combination of new, American-inspired Japanese visual imagery and the old visual language; the Japan before and after its culture and people were altered by war. 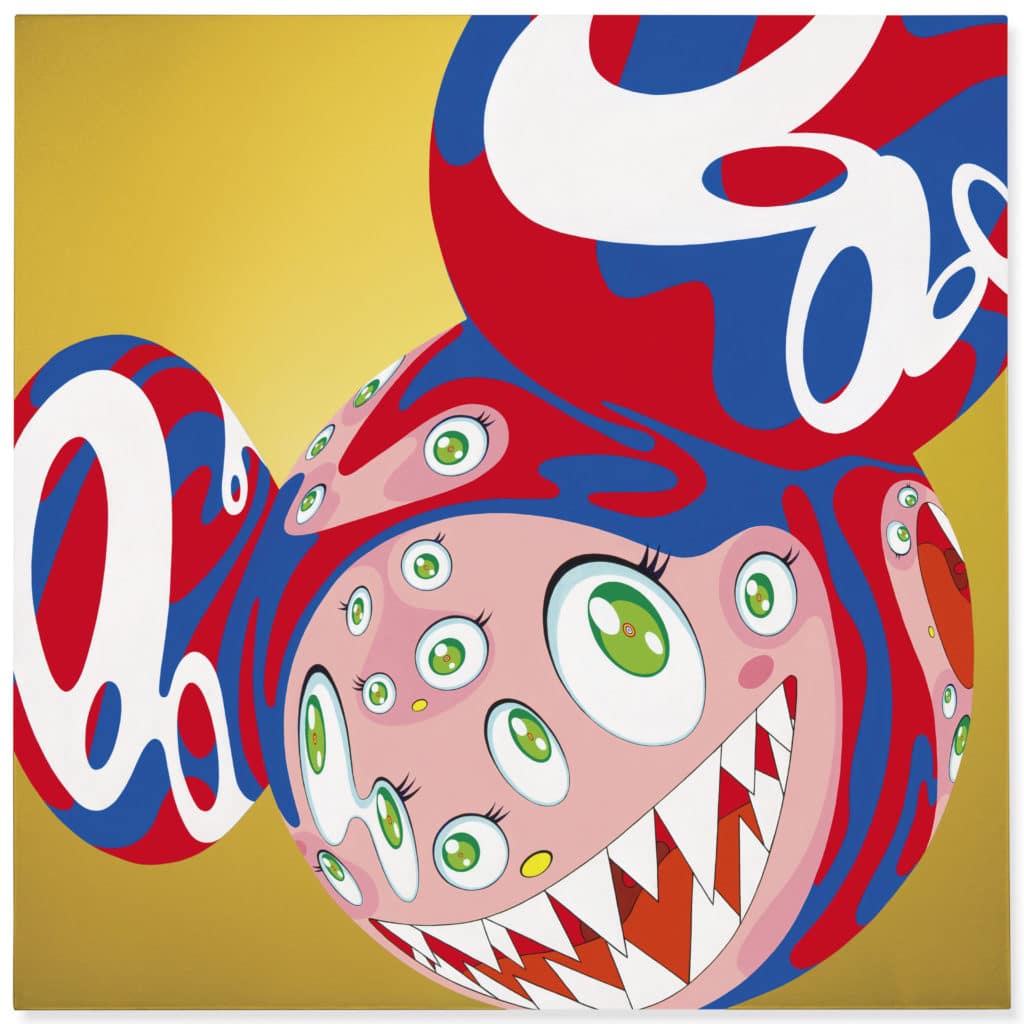 Takashi Murakami’s colourful paintings, prints, sculptures and fashion objects are often densely peopled with his invented characters, his first of which being his alter ego, Mr DOB. Since the 1990s, Mr DOB has emerged in Murakami’s highly acclaimed work, bringing with it the artist’s criticism of the flatness of Japanese art.

Desiring to create ‘a mechanical line that couldn’t be reproduced by hand’, Murakami collaborated with his friend, an aspiring graphic designer and owner of an Apple computer, to generate this perfect character.

Mr DOB is an intentional mix of Sonic the Hedgehog and Mickey Mouse, its ears marked by ‘D’ and ‘B’ respectively and its round face standing in for the ‘O’. Across his oeuvre, Murakami drew from Eastern and Western pop culture, Mr DOB being a perfect example of the coalescence of ‘kawaii’ culture and Disney, two approaches to depicting cuteness and innocence.

Yet, Mr DOB represents much of the opposite, with ‘DOB’ standing as the abbreviation for the Japanese slang term for ‘why?’. Mr DOB is read as literally questioning and critiquing the ceaselessness of consumer society, that which Murakami notes as having been brought to the country by the Americans following World War II.

It is perhaps because Mr DOB stands as Murakami’s alter-ego that the character evolves so much from work to work. Some versions of the character are cute and cuddly, undoubtedly innocent with its wide smile and glistening eyes. Others are positively demonic, its teeth pointy, its eyes multiplying and its body twisting and contorting. These different versions of Mr DOB reflect Murakami’s life experience, reactions to the reception of his work in his homeland and world events. 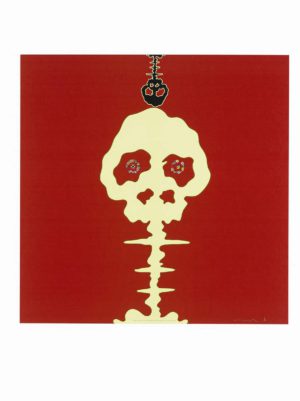 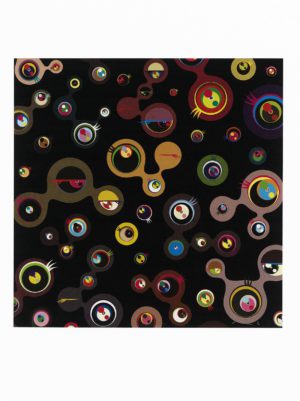