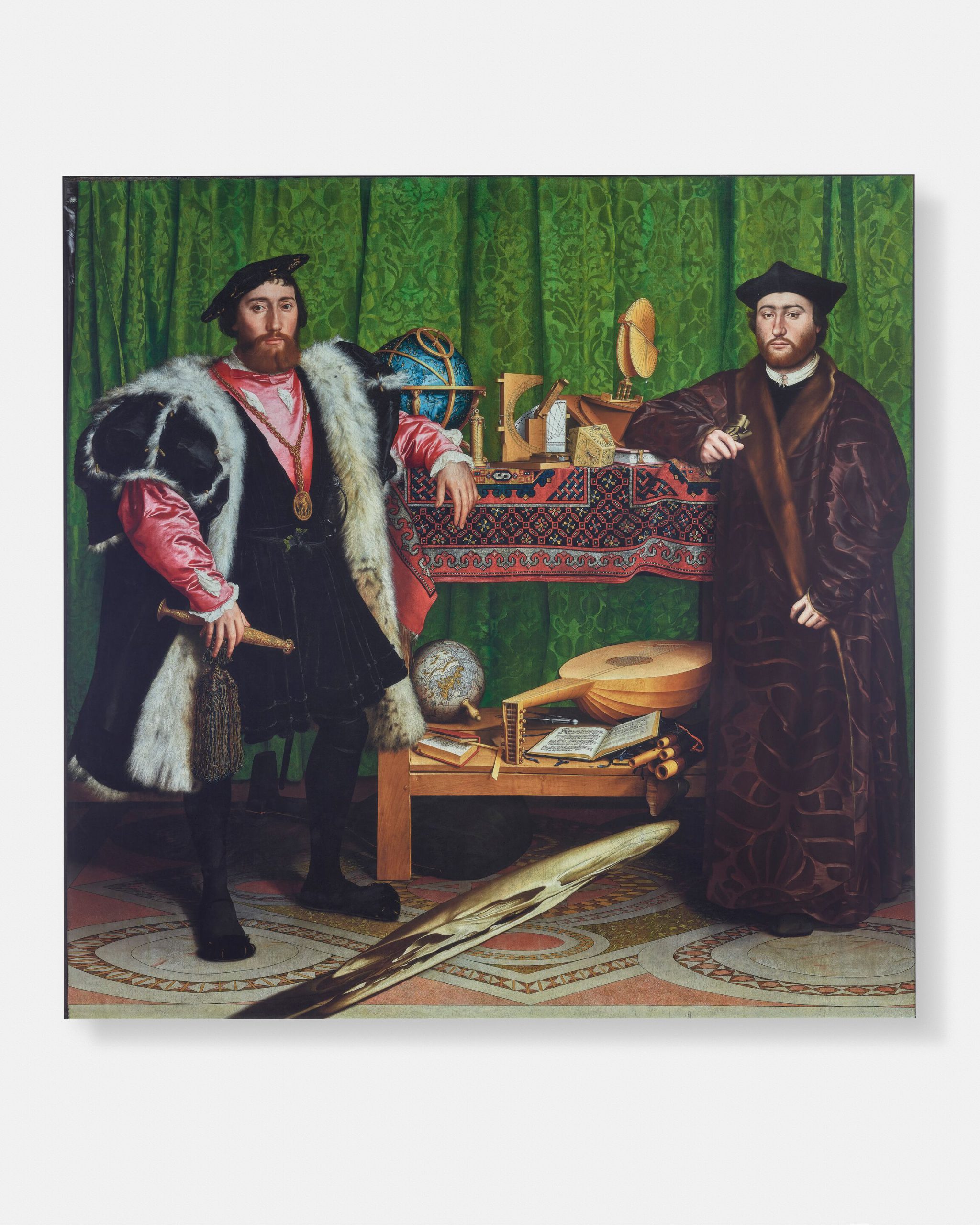 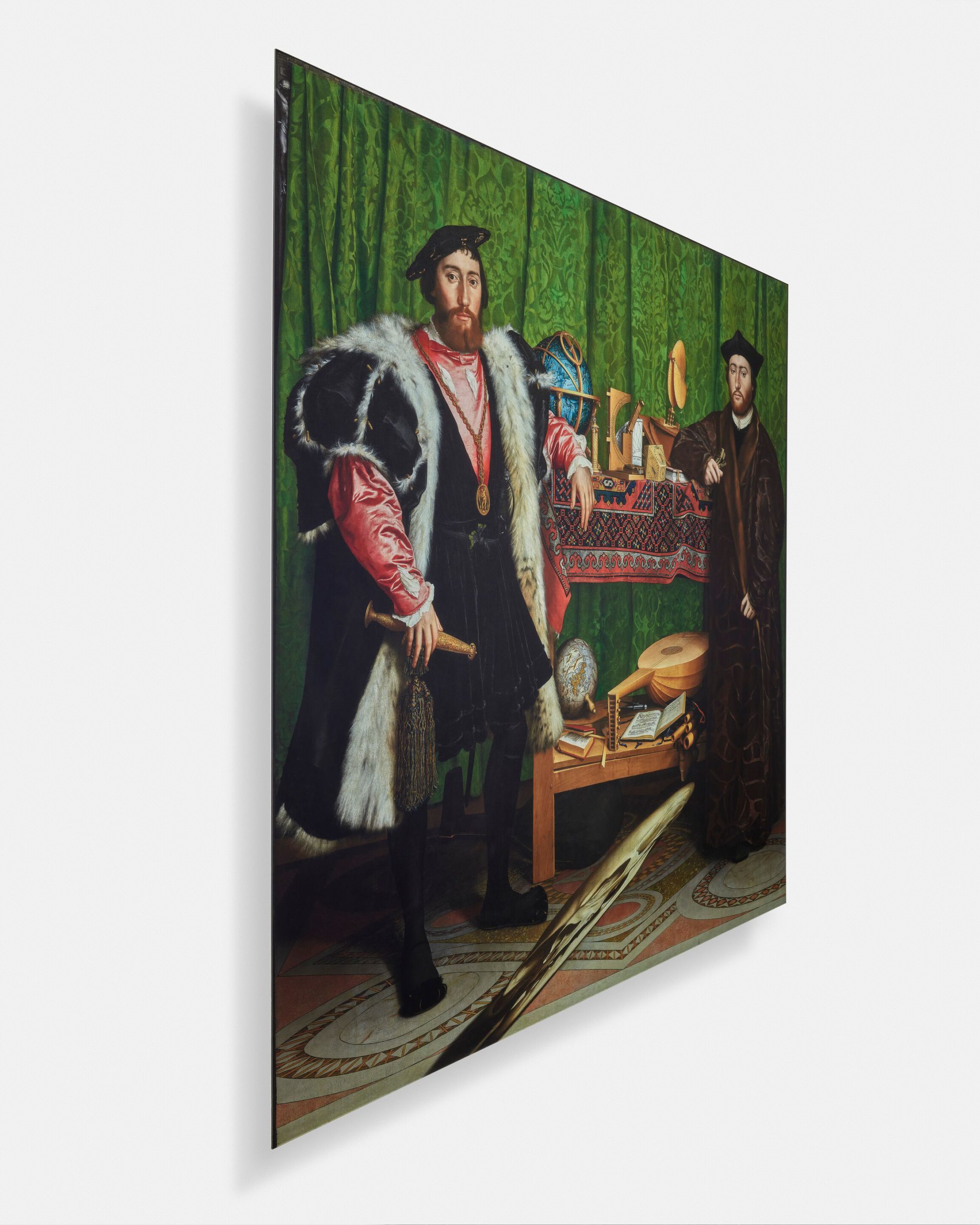 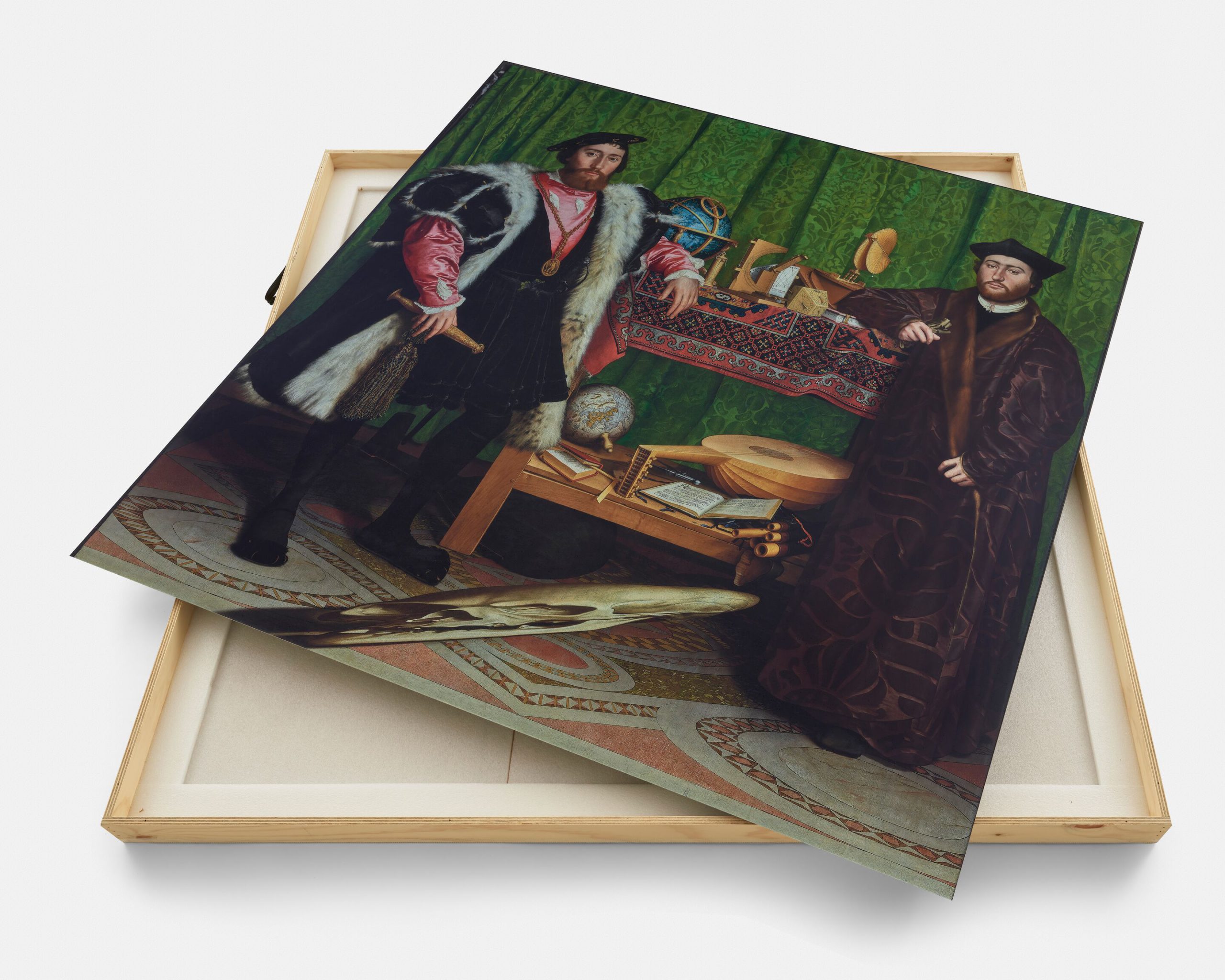 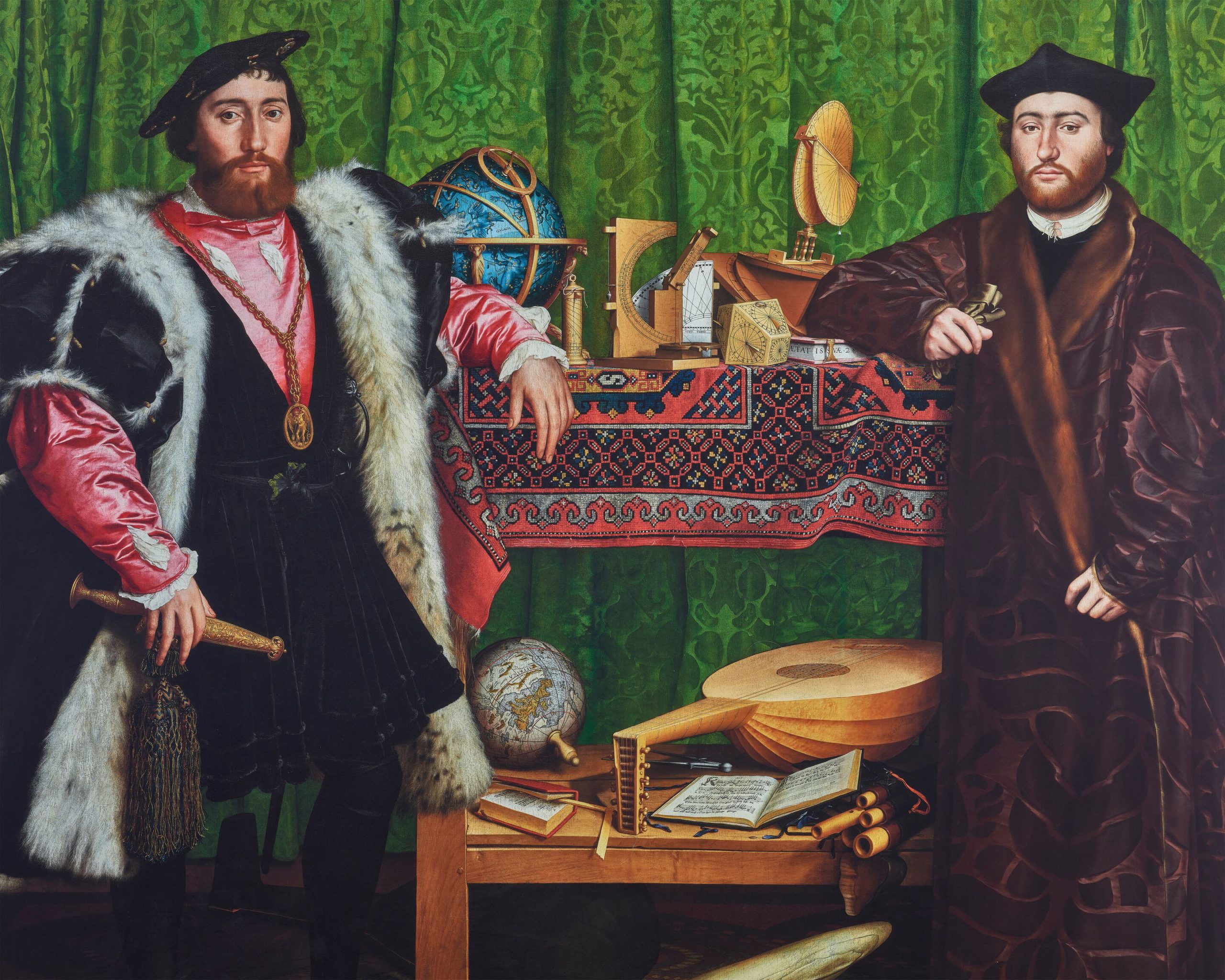 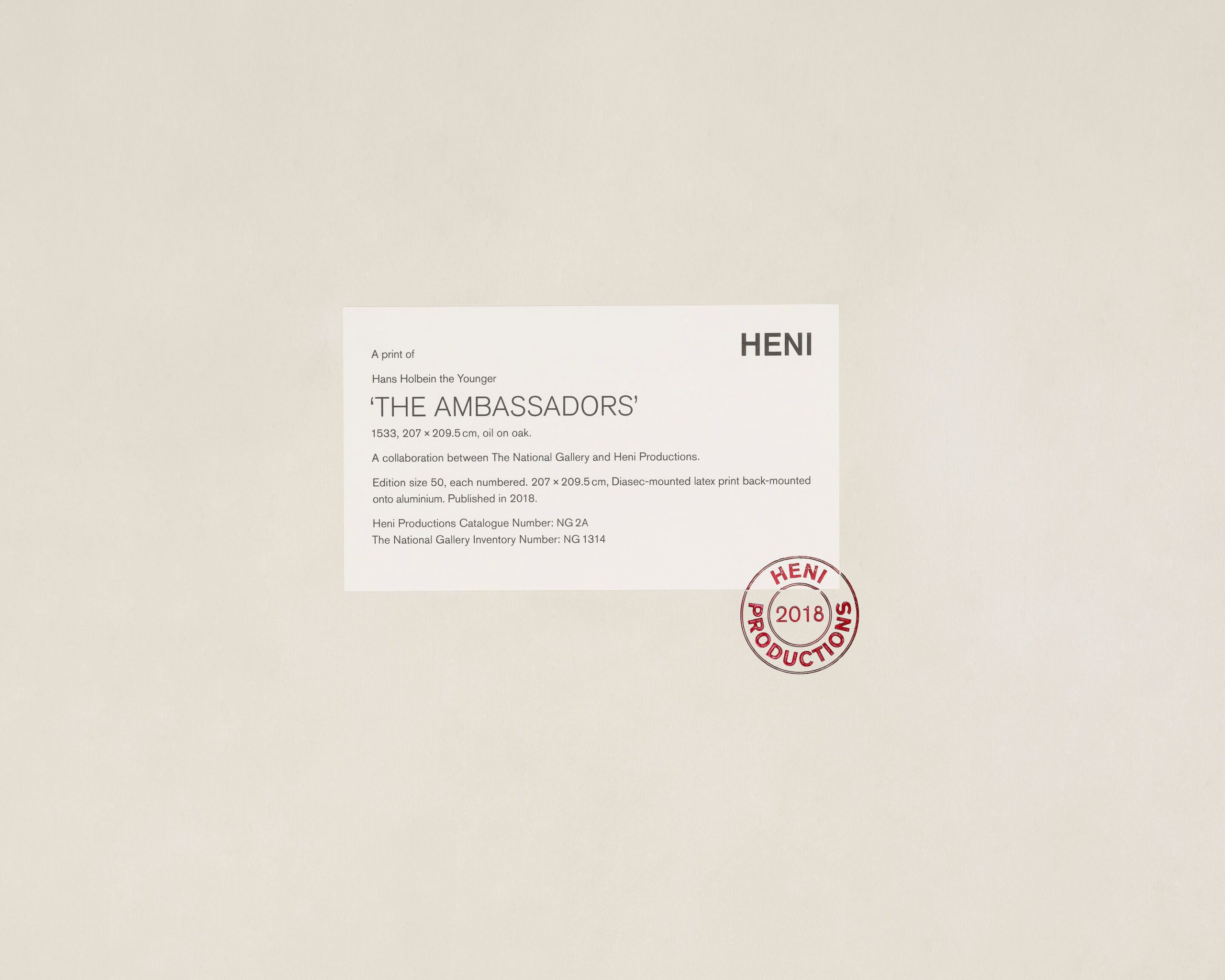 ‘Jean de Dinteville and Georges de Selve’ (1533), also known as ‘The Ambassadors’, is one of the most
iconic paintings by Hans Holbein the Younger. The canvas displays not only the double portrait of the
two influential French ambassadors, but also a variety of painstakingly rendered objects alluding to
contemporary culture, spirituality and politics, as well as the famous skull anamorphosis. It is part of the
permanent collection at the National Gallery in London and was made into a series of prints by HENI
Editions in 2018.

‘The Ambassadors’ was produced at a time of social and religious disruption, caused in part by Henry
VIII’s break with Catholicism, and the contents of the painting reflect the intricacies of the climate. The
French diplomats needed to tread carefully at the dangerous Tudor court and this commission was
perhaps intended to assert their intellectual identity. The musical instruments, objects related to
geographical knowledge, books and textiles that populate the canvas allude to the sitters’ social, cultural
and economic statuses. The soft, smooth quality of the ambassadors’ tunics and the rich furs of their
capes is also a testament to Holbein’s unparalleled painterly skills.

The distorted element on the ground, an elongated skull that can only be seen properly from the
bottom right corner of the canvas, is a rarely used optical effect called anamorphosis. Such inclusion was
possibly intended as a reminder of the sitters’ mortality in line with the painterly tradition of memento
mori. Its unique configuration has been interpreted as both a display of Holbein’s ability and a device to
encourage an active, embodied participation from viewers.

‘The Ambassadors’, with its hidden skull and meticulously detailed objects, continues to fascinate the
viewers. The painting is now synonymous with the Tudor court and, by extension, with the British early
modern overall.